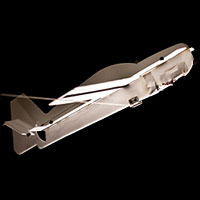 MIT researchers from the Computer Science and Artificial Intelligence Laboratory have developed a control system that lets a foam glider land on a perch like a pet parakeet.
Photo: Jason Dorfman/CSAIL

Everyone knows what it's like for an airplane to land: the slow maneuvering into an approach pattern, the long descent, and the brakes slamming on as soon as the plane touches down, which seems to just barely bring it to a rest a mile later. Birds, however, can switch from barreling forward at full speed to lightly touching down on a target as narrow as a telephone wire. Why can't an airplane be more like a bird?

MIT researchers have demonstrated a new control system that allows a foam glider with only a single motor on its tail to land on a perch, just like a pet parakeet. The work could have important implications for the design of robotic planes, greatly improving their maneuverability and potentially allowing them to recharge their batteries simply by alighting on power lines.

Birds can land so precisely because they take advantage of a complicated physical phenomenon called 'stall.' Even when a commercial airplane is changing altitude or banking, its wings are never more than a few degrees away from level. Within that narrow range of angles, the airflow over the plane's wings is smooth and regular, like the flow of water around a small, smooth stone in a creek bed.

A bird approaching its perch, however, will tilt its wings back at a much sharper angle. The airflow over the wings becomes turbulent, and large vortices — whirlwinds — form behind the wings. The effects of the vortices are hard to predict: If a plane tilts its wings back too far, it can fall out of the sky. Hence the name 'stall.'

The smooth airflow over the wings of a normally operating plane is well-understood mathematically; as a consequence, engineers are highly confident that a commercial airliner will respond to the pilot's commands as intended. But stall is a much more complicated phenomenon: Even the best descriptions of it are time-consuming to compute.

To design their control system, MIT Associate Professor Russ Tedrake, a member of the Computer Science and Artificial Intelligence Laboratory, and Rick Cory, a PhD student in Tedrake's lab who defended his dissertation this spring, first developed their own mathematical model of a glider in stall. For a range of launch conditions, they used the model to calculate sequences of instructions intended to guide the glider to its perch. 'It gets this nominal trajectory,' Cory explains. 'It says, 'If this is a perfect model, this is how it should fly.' But, he adds, 'because the model is not perfect, if you play out that same solution, it completely misses.'

The control system ends up being, effectively, a bunch of tubes pressed together like a fistful of straws. If the glider goes so far off course that it leaves one tube, it will still find itself in another. Once the glider is launched, it just keeps checking its position and executing the command that corresponds to the tube in which it finds itself. The design of the system earned Cory Boeing’s 2010 Engineering Student of the Year Award.

The measure of air resistance against a body in flight is known as the 'drag coefficient.' A cruising plane tries to minimize its drag coefficient, but when it's trying to slow down, it tilts its wings back in order to increase drag. Ordinarily, it can't tilt back too far, for fear of stall. But because Cory and Tedrake's control system takes advantage of stall, the glider, when it's landing, has a drag coefficient that's four to five times that of other aerial vehicles.

From spy planes to fairies

For some time, the U.S. Air Force has been interested in the possibility of unmanned aerial vehicles that could land in confined spaces and has been funding and monitoring research in the area. 'What Russ and Rick and their team is doing is unique,' says Gregory Reich of the Air Force Research Laboratory. 'I don't think anyone else is addressing the flight control problem in nearly as much detail.' Reich points out, however, that in their experiments, Cory and Tedrake used data from wall-mounted cameras to gauge the glider's position, and the control algorithms ran on a computer on the ground, which transmitted instructions to the glider. 'The computational power that you may have on board a vehicle of this size is really, really limited,' Reich says. Even though the MIT researchers' course correction algorithms are simple, they may not be simple enough.

Tedrake believes, however, that computer processors powerful enough to handle his and Cory's control algorithms are only a few years off. In the meantime, his lab has already begun to address the problem of moving the glider's location sensors onboard, and although Cory will be moving to California to take a job researching advanced robotics techniques for Disney, he hopes to continue collaborating with Tedrake. 'I visited the air force, and I visited Disney, and they actually have a lot in common,' Cory says. 'The air force wants an airplane that can land on a power line, and Disney wants a flying Tinker Bell that can land on a lantern. But the technology's similar.'

News Story Origin and Copyright: MIT
Click here for the original news release.
'Where the telescope ends, the microscope begins. Which of the two has the grander view?'