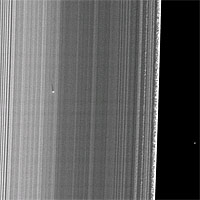 The Cassini spacecraft captured this image of a small object in the outer portion of Saturn's B ring casting a shadow on the rings as Saturn approached its August 2009 equinox.

The new object, situated about 650 kilometers (400 miles) inward from the outer edge of the B ring, was found by the presence of a localized bright feature and the detection of its shadow, which stretches 36 kilometers (22 miles) across the rings. Cassini scientists suspect the object is a solid moonlet, as opposed to a diffuse debris cloud, as might result from an impact, because no shadows have been observed accompanying any known impact plumes observed by Cassini. The shadow's length implies that the moonlet is protruding about 150 meters (500 feet) above the ring plane. If the moonlet is orbiting in the same plane as the ring material surrounding it, which is likely, it must be about 300 meters (1,000 feet) from bottom to top. However, the width of the bright feature implies that the moonlet must be several times wider than that height.

Unlike the band of moonlets discovered in Saturn's A ring earlier by Cassini (see PIA07792 and PIA07790), this object is not attended by a long propeller feature. However, the relatively large width of the bright features relative to the height implied by the long shadow may indicate that a fairly localized, perhaps truncated propeller feature surrounds a roughly spherical body that is not directly imaged. The A ring moonlets, which also have not been directly imaged, were found because of the propeller-like narrow gaps on either side of them that they create as they orbit within the rings. The lack of an extended propeller feature surrounding the new moonlet may not be not surprising because the B ring is dense, and the ring material in a dense ring would be expected to fill in any gaps around the moonlet more quickly than in a less dense region like the mid-A ring. Alternatively, it may simply be harder in the first place for a moonlet to create propeller-like gaps in a dense ring.

Straw-like patterns of clumping ring material are also visible along the edge of the outer B ring near the right of this image. See PIA09855 to learn more about these features.

This image and others like it (see PIA11656 and PIA11659) are only possible around the time of Saturn's equinox which occurs every half-Saturn-year (equivalent to about 15 Earth years). The illumination geometry that accompanies equinox lowers the sun's angle to the ring plane and causes out-of-plane structures to cast long shadows across the rings.

This view looks toward the sunlit side of the rings from about 42 degrees below the ring plane. Background stars are visible on the right of the image. They appear elongated by the camera's exposure time.

The image was taken in visible light with the Cassini spacecraft narrow-angle camera on July 26, 2009. The view was obtained at a distance of approximately 296,000 kilometers (184,000 miles) from Saturn and at a Sun-Saturn-spacecraft, or phase, angle of 120 degrees. Image scale is about 1 kilometer (4,680 feet) per pixel.

Scientists believe they finally understand why one of the most dynamic regions in Saturn's rings has such an irregular and varying shape, thanks to images captured by NASA's Cassini spacecraft. And the answer, published online today in the Astronomical Journal, is this: The rings are behaving like a miniature version of our own Milky Way galaxy.

This new insight, garnered from images of Saturn's most massive ring, the B ring, may answer another long-standing question: What causes the bewildering variety of structures seen throughout the very densest regions of Saturn's rings?

Another finding from new images of the B ring's outer edge was the presence of at least two perturbed regions, including a long arc of narrow, shadow-casting peaks as high as 3.5 kilometers (2 miles) above the ring plane. The areas are likely populated with small moons that might have migrated across the outer part of the B ring in the past and got trapped in a zone affected by the moon Mimas' gravity. This process is commonly believed to have configured the present-day solar system.

'We have found what we hoped we'd find when we set out on this journey with Cassini nearly 13 years ago: visibility into the mechanisms that have sculpted not only Saturn's rings, but celestial disks of a far grander scale, from solar systems, like our own, all the way to the giant spiral galaxies,' said Carolyn Porco, co-author on the new paper and Cassini imaging team lead, based at the Space Science Institute, Boulder, Colo.

New images and movies of the outer B ring edge can be found at http://www.nasa.gov/cassini, http://saturn.jpl.nasa.gov and http://ciclops.org .

Since NASA's Voyager spacecraft flew by Saturn in 1980 and 1981, scientists have known that the outer edge of the planet's B ring was shaped like a rotating, flattened football by the gravitational perturbations of Mimas. But it was clear, even in Voyager's findings, that the outer B ring's behavior was far more complex than anything Mimas alone might do.

Now, analysis of thousands of Cassini images of the B ring taken over a four-year period has revealed the source of most of the complexity: at least three additional, independently rotating wave patterns, or oscillations, that distort the B ring's edge. These oscillations, with one, two or three lobes, are not created by any moons. They have instead spontaneously arisen, in part because the ring is dense enough, and the B ring edge is sharp enough, for waves to grow on their own and then reflect at the edge.

'These oscillations exist for the same reason that guitar strings have natural modes of oscillation, which can be excited when plucked or otherwise disturbed,' said Joseph Spitale, lead author on today's article and an imaging team associate at the Space Science Institute. 'The ring, too, has its own natural oscillation frequencies, and that's what we're observing.'

Astronomers believe such 'self-excited' oscillations exist in other disk systems, like spiral disk galaxies and proto-planetary disks found around nearby stars, but they have not been able to directly confirm their existence. The new observations confirm the first large-scale wave oscillations of this type in a broad disk of material anywhere in nature.

Self-excited waves on small, 100-meter (300-foot) scales have been previously observed by Cassini instruments in a few dense ring regions and have been attributed to a process called 'viscous overstability.' In that process, the ring particles' small, random motions feed energy into a wave and cause it to grow. The new results confirm a Voyager-era predication that this same process can explain all the puzzling chaotic waveforms found in Saturn's densest rings, from tens of meters up to hundreds of kilometers wide.

'Normally viscosity, or resistance to flow, damps waves -- the way sound waves traveling through the air would die out,' said Peter Goldreich, a planetary ring theorist at the California Institute of Technology in Pasadena. 'But the new findings show that, in the densest parts of Saturn's rings, viscosity actually amplifies waves, explaining mysterious grooves first seen in images taken by the Voyager spacecraft.'

The two perturbed B ring regions found orbiting within Mimas' zone of influence stretch along arcs up to 20,000 kilometers (12,000 miles) long. The longest one was first seen last year when the sun's low angle on the ring plane betrayed the existence of a series of tall structures through their long, spiky shadows. The small moons disturbing the material are probably hundreds of meters to possibly a kilometer or more in size.