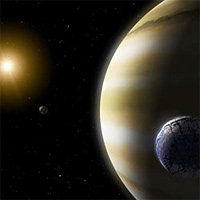 Artist concept of an extrasolar planet.

A team of researchers led by Bill Cochran of The University of Texas at Austin has used NASA’s Kepler spacecraft to discover an unusual multiple-planet system containing a super-Earth and two Neptune-sized planets orbiting in resonance with each other. They will announce the find today in Nantes, France at a joint meeting of the American Astronomical Society’s Division of Planetary Science and the European Planetary Science Conference. The research will be published in a special Kepler issue of The Astrophysical Journal Supplement Series in November.

Cochran’s team is announcing three planets orbiting Kepler-18, a star similar to the Sun. Kepler-18 is just 10 percent larger than the Sun and contains 97 percent of the Sun’s mass. It may host more planets than the three announced today.

The planets are designated b, c, and d. All three planets orbit much closer to Kepler-18 than Mercury does to the Sun. Orbiting closest to Kepler-18 with a 3.5-day period, planet b weighs in at about 6.9 times the mass of Earth, and twice Earth’s size. Planet b is considered a “super-Earth.” Planet c has a mass of about 17 Earths, is about 5.5 times Earth’s size, and orbits Kepler-18 in 7.6 days. Planet d weighs in at 16 Earths, at 7 times Earth’s size, and has a 14.9-day orbit. The masses and sizes of c and d qualify them as low-density “Neptune-class” planets.

Planet c orbits the star twice for every one orbit d makes. But the times that each of these planets transit the face of Kepler-18 “are not staying exactly on that orbital period,” Cochran says. “One is slightly early when the other one is slightly late, [then] both are on time at the same time, and then vice-versa.”

Scientifically speaking, c and d are orbiting in a 2:1 resonance. “It means they’re interacting with each other,” Cochran explains. “When they are close to each other ... they exchange energy, pull and tug on each other.”

Kepler uses the “transit method” to look for planets. It monitors a star’s brightness over time, looking for periodic dips that could indicate a planet passing in front of the star. A large part of the Kepler science team’s work is
proving that potential planets they find aren’t something else that mimics the transit signature (such as a perfectly aligned background star, specifically either an eclipsing binary star or a single star orbited by a giant planet). That follow-up work to Kepler is done by scores of scientists using ground-based telescopes the world over (including several at The University of Texas at Austin’s McDonald Observatory) as well as Spitzer Space Telescope.

Kepler-18's planets c and d did astronomers a favor by proving their planet credentials up front via their orbital resonance; they had to be in the same planetary system as each other for the resonance to occur.

Confirming the planetary bona fides of planet b, the super-Earth, was much more complicated, Cochran says. His team used a technique called “validation,” instead of verification. They set out to figure out the probability that it could be something other than a planet.

First, they used the Palomar 5-meter (200-inch) Hale Telescope with adaptive optics to take an extremely high-resolution look at the space around Kepler-18. They wanted to see if anything close to the star could be positively identified as a background object that would cause the transit signal they had attributed to a super-Earth.

“We successively went through every possible type of object that could be there,” Cochran says. “There are limits on the sort of objects that can be there at different distances from the star.” Astronomers know how many of different types of objects (various kinds of stars, background galaxies, and more) are seen on average in the sky. They didn’t find anything in the Palomar image.

“There’s a small possibility that [planet b] is due to a background object, but we’re very confident that it’s probably a planet,” Cochran says. His team calculated that the likelihood the object is a planet is 700 times more
likely than the likelihood that it’s a background object.The process is called “planet validation,” rather than the usual “planet verification.” Cochran says it’s important to understand the difference — not just for this system, but for future discoveries from Kepler and other missions.

“We’re trying to prepare the astronomical community and the public for the concept of validation,” he says. “The goal of Kepler is to find an Earth-sized planet in the habitable zone [where life could arise], with a one-year orbit.
Proving that such an object really is a planet is very difficult [with current technology]. When we find what looks to be a habitable Earth, we’ll have to use a validation process, rather than a confirmation process. We’re going to
have to make statistical arguments.”