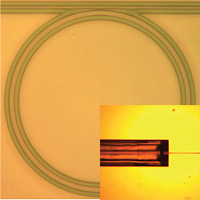 Researchers have created a tiny 'microring resonator,' at center, small enough to fit on a computer chip. The device converts continuous laser light into numerous ultrashort pulses, a technology that might have applications in more advanced sensors, communications systems and laboratory instruments. At lower right is a grooved structure that holds an optical fiber leading into the device.

Researchers at Purdue University and the National Institute of Standards and Technology (NIST) have created a device small enough to fit on a computer chip that converts continuous laser light into numerous ultrashort pulses, a technology that might have applications in more advanced sensors, communications systems and laboratory instruments.

'These pulses repeat at very high rates, corresponding to hundreds of billions of pulses per second,' said Andrew Weiner, the Scifres Family Distinguished Professor of Electrical and Computer Engineering.

The tiny 'microring resonator' is about 80 micrometers, or the width of a human hair, and is fabricated from silicon nitride, which is compatible with silicon material widely used for electronics. Infrared light from a laser enters the chip through a single optical fiber and is directed by a structure called a waveguide into the microring.

The pulses have many segments corresponding to different frequencies, which are called 'comb lines' because they resemble teeth on a comb when represented on a graph.

By precisely controlling the frequency combs, researchers hope to create advanced optical sensors that detect and measure hazardous materials or pollutants, ultrasensitive spectroscopy for laboratory research, and optics-based communications systems that transmit greater volumes of information with better quality while increasing bandwidth. The comb technology also has potential for a generation of high-bandwidth electrical signals with possible applications in wireless communications and radar.

The light originates from a continuous-wave laser, also called a single-frequency laser.

The laser light undergoes 'nonlinear interaction' while inside the microring, generating a comb of new frequencies that is emitted out of the device through another optical fiber.

'The nonlinearity is critical to the generation of the comb,' said doctoral student Fahmida Ferdous. 'With the nonlinearity we obtain a comb of many frequencies, including the original one, and the rest are new ones generated in the microring.'

Findings are detailed in a research paper appearing online this month in the journal Nature Photonics. The paper is scheduled for publication in the Dec. 11 issue.

Although other researchers previously have demonstrated the comb-generation technique, the team is the first to process the frequencies using 'optical arbitrary waveform technology,' pioneered by Purdue researchers led by Weiner. The researchers were able to control the amplitude and phase of each spectral line, learning that there are two types of combs - 'highly coherent' and 'partially coherent' - opening up new avenues to study the physics of the process.

'In future investigations, the ability to extract the phase of individual comb lines may furnish clues into the physics of the comb-generation process,' Ferdous said. 'Future work will include efforts to create devices that have the proper frequency for commercial applications.'

The silicon-nitride device was fabricated by a team led by Houxun Miao, a researcher at NIST's Center for Nanoscale Science and Technology and the Maryland Nanocenter at the University of Maryland. Some of the work was performed at the Birck Nanotechnology Center in Purdue's Discovery Park, and experiments demonstrating short-pulse generation were performed in Purdue's School of Electrical and Computer Engineering.

The effort at Purdue is funded in part by the National Science Foundation and the Naval Postgraduate School.