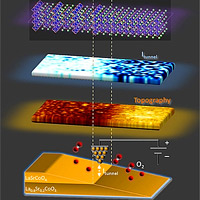 The MIT team used a scanning tunneling microscope (STM) to study the electrical activity of a superlattice material composed of two different compounds of the elements strontium, lanthanum and cobalt. At bottom, a diagram of how they 'sliced' the material on an angle to expose wider bands of the thin layers of material. The center two images show the resulting measurements of the surface topography of the material, and the activity of electrons moving through it. At top, a diagram of the molecular structures of the two compounds.

New research at MIT could dramatically improve the efficiency of fuel cells, which are considered a promising alternative to batteries for powering everything from electronic devices to cars and homes.

Fuel cells make electricity by combining hydrogen, or hydrocarbon fuels, with oxygen. But the most efficient types, called solid oxide fuel cells (SOFC), have drawbacks that have limited their usefulness — including operating temperatures above 700 degrees Celsius (roughly 1300 degrees Fahrenheit). Now, MIT researchers have unraveled the properties of a promising alternative material structure for a key component of these devices.

The new structure, a “superlattice” of two compounds interleaved at a tiny scale, could serve as one of the two electrodes in the fuel cell. The complex material, discovered about six years ago and known as LSC113/214, is composed of two oxides of the elements lanthanum, strontium and cobalt. While one of the oxides was already known as an especially good material for such electrodes, the combination of the two is far more potent in promoting oxygen reduction than either oxide alone.

The interfaces between these two oxides were thought to be the key. But until now, no one had been able to observe the LSC113/214 interface properties in operation, at sufficiently high resolution, to figure out why it worked so well.

Oxygen reduction is one of two main reactions in a fuel cell, and the one that has limited their overall performance — so finding improved materials for that reaction could be a key advance for fuel cells, the researchers say. The new findings are published in the journal Advanced Energy Materials in a paper co-authored by graduate student Yan Chen, professors Harry Tuller and Bilge Yildiz, and three other researchers at MIT.

Yildiz, an associate professor of nuclear science and engineering, says LSC113/214 has been “a singular example” of a material with extremely high reactivity to oxygen reduction; the new results explaining why it works so well could lead to further optimization or the discovery of other materials that might perform even better.

The best of both

The key to the material’s performance, she explains, is the marriage of complementary qualities from its two constituents. One of the oxides allows superior conduction and transfer of electrons, while the other excels at holding onto oxygen atoms; to perform well as a fuel cell’s cathode — one of its two electrodes — a material needs to have both qualities.

The close proximity of the two materials in this superlattice causes them to “borrow” one another’s attributes, the MIT team found. The result is a material whose reactivity exceeds that of the best materials currently used in fuel cells, Yildiz says: “It’s the best of the two worlds.”

Now that the MIT team has analyzed LSC113/214, it may be possible to discover even better materials by conducting systematic searches, Yildiz says; the team is now working on that. “If we can crack this problem, then we can make great strides in improving the performance,” adds Tuller, a professor of ceramics and electronic materials in MIT’s Department of Materials Science and Engineering.

The finding was made possible by instrumentation developed in Yildiz’s laboratory at MIT for observation of electron-transfer properties on surfaces: The instrument, a modified scanning tunneling microscope (STM), can observe materials at high temperatures and in an oxygen-rich environment — “representative of the operating conditions of a fuel-cell cathode,” Yildiz says. This high-temperature phenomenon would not have been detectable with conventional methods.

Tuller describes the superlattice as a “layer cake” of the two different oxides. But these layers are vanishingly thin. To overcome this, the team “sliced” the layers on an extreme angle, exposing much wider surfaces of each. “That magnifies the layers by a hundredfold,” Tuller says.

That slicing is done using a focused ion beam, Chen explains, to expose the interface in a way that the STM can observe more easily at high temperature.

The researchers hope that with this new knowledge, it will be possible to make rapid progress in the search for better electrode materials, helping make fuel cells practical for a wide range of energy applications, from powering homes to powering mobile devices.

John Kilner, a professor of energy materials at Imperial College, London, who was not involved in this project, calls this “a very elegant set of experiments that contributes a great deal toward our understanding of the very complex problem of oxygen surface exchange.”

Kilner adds, “It waits to be seen if we can capitalize on this knowledge to aid in the construction of practical devices, but it opens up the possibility of engineering new structures with enhanced performance at low temperatures.”

The work was supported by the U.S. Department of Energy’s Basic Energy Sciences Program.