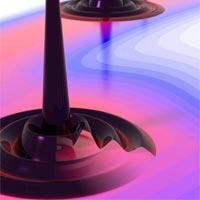 Artist's conception of microscopic 'quantum droplet' discovered by JILA physicists in a gallium-arsenide semiconductor excited by an ultrafast red laser pulse. Each droplet consists of electrons and holes (representing absent electrons) arranged in a liquid-like pattern of rings. The surrounding area is plasma. The discovery adds to understanding of how electrons interact in optoelectronic devices. Credit: Brad Baxley/JILA

JILA physicists used an ultrafast laser and help from German theorists to discover a new semiconductor quasiparticle—a handful of smaller particles that briefly condense into a liquid-like droplet.

JILA is a joint institute of CU-Boulder and the National Institute of Standards and Technology (NIST).

Quasiparticles are composites of smaller particles that can be created inside solid materials and act together in a predictable way. A simple example is the exciton, a pairing, due to electrostatic forces, of an electron and a so-called “hole,” a place in the material’s energy structure where an electron could be, but isn’t.

The new quasiparticle, described in the Feb. 27 issue of Nature and featured on the journal's cover, is a microscopic complex of electrons and holes in a new, unpaired arrangement. The researchers call this a 'quantum droplet' because it has quantum characteristics such as well-ordered energy levels, but also has some of the characteristics of a liquid. It can have ripples, for example. It differs from a familiar liquid like water because the quantum droplet has a finite size, beyond which the association between electrons and holes disappears. Quasiparticles are composites of smaller particles that can be created inside solid materials and act together in a predictable way. A simple example is the exciton, a pairing, due to electrostatic forces, of an electron and a so-called 'hole,' a place in the material's energy structure where an electron could be, but isn't.

Although its lifetime is only a fleeting 25 picoseconds (trillionths of a second), the quantum droplet is stable enough for research on how light interacts with specialized forms of matter.

'Electron-hole droplets are known in semiconductors, but they usually contain thousands to millions of electrons and holes,' says JILA physicist Steven Cundiff, who studies the properties of cutting-edge lasers and what they reveal about matter. 'Here we are talking about droplets with around five electrons and five holes. Cundiff also is an adjoint professor of physics at CU-Boulder.

'Regarding practical benefits, nobody is going to build a quantum droplet widget. But this does have indirect benefits in terms of improving our understanding of how electrons interact in various situations, including in optoelectronic devices.'

The JILA team created the new quasiparticle by exciting a gallium-arsenide semiconductor with an ultrafast red laser emitting about 100 million pulses per second. The pulses initially form excitons, which are known to travel around in semiconductors. As laser pulse intensity increases, more electron-hole pairs are created, with quantum droplets developing when the exciton density reaches a certain level. At that point, the pairing disappears and a few electrons take up positions relative to a given hole. The negatively charged electrons and positively charged holes create a neutral droplet. The droplets are like bubbles held together briefly by pressure from the surrounding plasma.

JILA's experimental data on energy levels of individual droplet rings agreed with theoretical calculations by co-authors at the University of Marburg in Germany. JILA researchers found they could tap into each energy level by tailoring the quantum properties of the laser pulses to match the particle correlations within the droplets. The droplets seem stable enough for future systematic studies on interactions between light and highly correlated states of matter. In addition, quasiparticles, in general, can have exotic properties not found in their constituent parts, and thus, can play a role in controlling the behavior of larger systems and devices.

Co-authors of the paper in addition to Cundiff are first author Andrew Almand-Hunter, a graduate student in the CU-Boulder Department of Physics; Hebin Li, formerly a postdoctoral scientist in Cundiff's group and now an assistant professor at Florida International University; and graduate student Martin Mootz, Associate Professor Mackillo Kira and Professor Stephan Koch, all of the University of Marburg in Germany.

The JILA research is supported by the National Science Foundation, NIST and the Alexander von Humboldt Foundation.