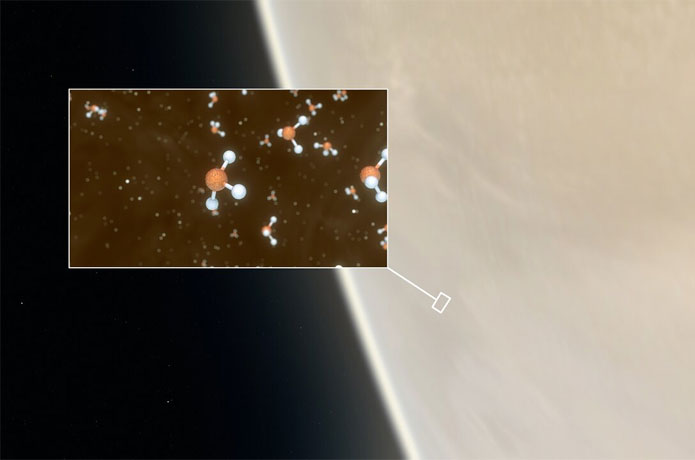 An international team of astronomers today announced the discovery of a rare molecule — phosphine — in the clouds of Venus. On Earth, this gas is only made industrially or by microbes that thrive in oxygen-free environments. Astronomers have speculated for decades that high clouds on Venus could offer a home for microbes — floating free of the scorching surface but needing to tolerate very high acidity. The detection of phosphine could point to such extra-terrestrial “aerial” life.

“When we got the first hints of phosphine in Venus’s spectrum, it was a shock!”, says team leader Jane Greaves of Cardiff University in the UK, who first spotted signs of phosphine in observations from the James Clerk Maxwell Telescope (JCMT), operated by the East Asian Observatory, in Hawai?i. Confirming their discovery required using 45 antennas of the Atacama Large Millimeter/submillimeter Array (ALMA) in Chile, a more sensitive telescope in which the European Southern Observatory (ESO) is a partner. Both facilities observed Venus at a wavelength of about 1 millimetre, much longer than the human eye can see — only telescopes at high altitude can detect it effectively.

The international team, which includes researchers from the UK, US and Japan, estimates that phosphine exists in Venus’s clouds at a small concentration, only about twenty molecules in every billion. Following their observations, they ran calculations to see whether these amounts could come from natural non-biological processes on the planet. Some ideas included sunlight, minerals blown upwards from the surface, volcanoes, or lightning, but none of these could make anywhere near enough of it. These non-biological sources were found to make at most one ten thousandth of the amount of phosphine that the telescopes saw.

To create the observed quantity of phosphine (which consists of hydrogen and phosphorus) on Venus, terrestrial organisms would only need to work at about 10% of their maximum productivity, according to the team. Earth bacteria are known to make phosphine: they take up phosphate from minerals or biological material, add hydrogen, and ultimately expel phosphine. Any organisms on Venus will probably be very different to their Earth cousins, but they too could be the source of phosphine in the atmosphere.

While the discovery of phosphine in Venus’s clouds came as a surprise, the researchers are confident in their detection. “To our great relief, the conditions were good at ALMA for follow-up observations while Venus was at a suitable angle to Earth. Processing the data was tricky, though, as ALMA isn’t usually looking for very subtle effects in very bright objects like Venus,” says team member Anita Richards of the UK ALMA Regional Centre and the University of Manchester. “In the end, we found that both observatories had seen the same thing — faint absorption at the right wavelength to be phosphine gas, where the molecules are backlit by the warmer clouds below,” adds Greaves, who led the study published today in Nature Astronomy.

Another team member, Clara Sousa Silva of the Massachusetts Institute of Technology in the US, has investigated phosphine as a “biosignature” gas of non-oxygen-using life on planets around other stars, because normal chemistry makes so little of it. She comments: “Finding phosphine on Venus was an unexpected bonus! The discovery raises many questions, such as how any organisms could survive. On Earth, some microbes can cope with up to about 5% of acid in their environment — but the clouds of Venus are almost entirely made of acid.”

The team believes their discovery is significant because they can rule out many alternative ways to make phosphine, but they acknowledge that confirming the presence of “life” needs a lot more work. Although the high clouds of Venus have temperatures up to a pleasant 30 degrees Celsius, they are incredibly acidic — around 90% sulphuric acid — posing major issues for any microbes trying to survive there.

ESO astronomer and ALMA European Operations Manager Leonardo Testi, who did not participate in the new study, says: “The non-biological production of phosphine on Venus is excluded by our current understanding of phosphine chemistry in rocky planets' atmospheres. Confirming the existence of life on Venus's atmosphere would be a major breakthrough for astrobiology; thus, it is essential to follow-up on this exciting result with theoretical and observational studies to exclude the possibility that phosphine on rocky planets may also have a chemical origin different than on Earth.”

More observations of Venus and of rocky planets outside our Solar System, including with ESO’s forthcoming Extremely Large Telescope, may help gather clues on how phosphine can originate on them and contribute to the search for signs of life beyond Earth.

This research was presented in the paper “Phosphine Gas in the Cloud Decks of Venus” to appear in Nature Astronomy.

An accompanying paper by some of team members, titled “The Venusian Lower Atmosphere Haze as a Depot for Desiccated Microbial Life: A Proposed Life Cycle for Persistence of the Venusian Aerial Biosphere”, was published in Astrobiology in August 2020. Another related study by some of the same authors, "Phosphine as a Biosignature Gas in Exoplanet Atmospheres", was published in Astrobiology in January 2020.

The European Southern Observatory (ESO) is the foremost intergovernmental astronomy organisation in Europe and the world’s most productive ground-based astronomical observatory by far. It has 16 Member States: Austria, Belgium, the Czech Republic, Denmark, France, Finland, Germany, Ireland, Italy, the Netherlands, Poland, Portugal, Spain, Sweden, Switzerland and the United Kingdom, along with the host state of Chile and with Australia as a Strategic Partner. ESO carries out an ambitious programme focused on the design, construction and operation of powerful ground-based observing facilities enabling astronomers to make important scientific discoveries. ESO also plays a leading role in promoting and organising cooperation in astronomical research. ESO operates three unique world-class observing sites in Chile: La Silla, Paranal and Chajnantor. At Paranal, ESO operates the Very Large Telescope and its world-leading Very Large Telescope Interferometer as well as two survey telescopes, VISTA working in the infrared and the visible-light VLT Survey Telescope. Also at Paranal ESO will host and operate the Cherenkov Telescope Array South, the world’s largest and most sensitive gamma-ray observatory. ESO is also a major partner in two facilities on Chajnantor, APEX and ALMA, the largest astronomical project in existence. And on Cerro Armazones, close to Paranal, ESO is building the 39-metre Extremely Large Telescope, the ELT, which will become “the world’s biggest eye on the sky”.

The Atacama Large Millimeter/submillimeter Array (ALMA), an international astronomy facility, is a partnership of ESO, the U.S. National Science Foundation (NSF) and the National Institutes of Natural Sciences (NINS) of Japan in cooperation with the Republic of Chile. ALMA is funded by ESO on behalf of its Member States, by NSF in cooperation with the National Research Council of Canada (NRC) and the Ministry of Science and Technology (MOST) and by NINS in cooperation with the Academia Sinica (AS) in Taiwan and the Korea Astronomy and Space Science Institute (KASI). ALMA construction and operations are led by ESO on behalf of its Member States; by the National Radio Astronomy Observatory (NRAO), managed by Associated Universities, Inc. (AUI), on behalf of North America; and by the National Astronomical Observatory of Japan (NAOJ) on behalf of East Asia. The Joint ALMA Observatory (JAO) provides the unified leadership and management of the construction, commissioning and operation of ALMA.

With a diameter of 15m (50 feet) the James Clerk Maxwell Telescope (JCMT) is the largest single dish astronomical telescope in the world designed specifically to operate in the submillimetre wavelength region of the electromagnetic spectrum. The JCMT is used to study our Solar System, interstellar and circumstellar dust and gas, evolved stars, and distant galaxies. It is situated in the science reserve of Maunakea, Hawai?i, at an altitude of 4092m (13 425 feet). The JCMT is operated by the East Asian Observatory on behalf of NAOJ; ASIAA; KASI; CAMS as well as the National Key R&D Program of China. Additional funding support is provided by the STFC and participating universities in the UK and Canada.

News Story Origin and Copyright: ESO
Click here for the original news release.
'Every creative act involves ... a new innocence of perception, liberated from the cataract of accepted belief.' 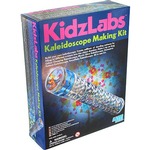