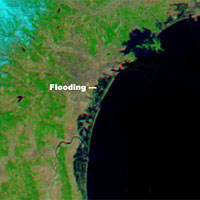 Coastal flooding from the March 11, 2011 tsunami triggered by a magnitude 8.9 earthquake off Japan's northeast coast can be seen in this image from the NASA's Terra spacecraft.

The extent of inundation from the destructive and deadly tsunami triggered by the March 11, 2011, magnitude 8.9 earthquake centered off Japan's northeastern coast about 130 kilometers (82 miles) east of the city of Sendai is revealed in this before-and-after image pair from the Multi-angle Imaging SpectroRadiometer (MISR) instrument on NASA's Terra spacecraft.

The image comparison is online at http://photojournal.jpl.nasa.gov/catalog/PIA13913 . For optimum viewing, click the link to open the full-resolution TIFF image.

The new image, shown on the right, was acquired at 10:30 a.m. local time (01:30 UTC) on March 12, 2011. For comparison, shown on the left is a MISR image from about 10 years ago, on March 16, 2001, acquired under nearly identical illumination conditions. Flooding extending more than 4 kilometers (2.5 miles) inland from the eastern shoreline is visible in the post-earthquake image. The white sand beaches visible in the pre-earthquake view are now covered by water and can no longer be seen. Among the locations where severe flooding is visible is the area around Matsukawa-ura Bay, located just north and east of the image center.

These unique images enhance the presence of water in two ways. First, their near-infrared observations cause vegetated areas to appear red, which contrasts strongly with the blue shades of the water. Second, by combining nadir (vertical-viewing) imagery with observations acquired at a view angle of 26 degrees, reflected sunglint enhances the brightness of water, which is shown in shades of blue. This use of different view-angle observations causes a stereoscopic effect, where elevated clouds have a yellow tinge at their top edges and blue tinge at their bottom edges.