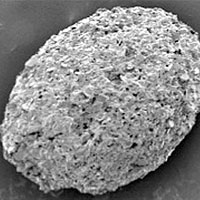 Scanning electron microscopy images reveal an microscopic, oval-shaped shell with tapered ends, from which an organism’s feet may have extended. The surface of the shell are made up of tiny bits of silica, aluminum and potassium, which the organism likely collected from the environment and glued to form armor.

The first organisms to emerge after an ancient worldwide glaciation likely evolved hardy survival skills, arming themselves with tough exteriors to weather a frozen climate.

Researchers at MIT, Harvard University and Smith College have discovered hundreds of microscopic fossils in rocks dating back nearly 710 million years, around the time when the planet emerged from a global glaciation, or “Snowball Earth,” event. The fossils are remnants of tiny, amoeba-like organisms that likely survived the harsh post-glacial environment by building armor and reaching out with microscopic “feet” to grab minerals from the environment, cobbling particles together to make protective shells.

The discovery is the earliest evidence of shell building, or agglutination, in the fossil record. The team found a diversity of fossils, suggesting life may have recovered relatively quickly following the first major Snowball Earth event. The researchers report their findings in the current issue of Earth and Planetary Science Letters.

The widely held Snowball Earth theory maintains that massive ice sheets covered the planet from pole to pole hundreds of millions of years ago. Geologists have found evidence of two major snowball periods — at 710 and 635 million years ago — in glacial deposits that formed close to the modern equator. Fossil records illustrate an explosion of complex, multicellular life following the more recent ice age. However, not much is known about life between the two major glaciations — a period of about 75 million years that, until now, exhibited few signs of life.

“We know quite well what happened before the first Snowball, but we have no idea what happened in between,” says Tanja Bosak, assistant professor of geobiology at MIT, and the paper’s lead author. “Now we’re really starting to realize there’s a lot of unexpected life here.”

Bosak’s colleagues, Francis Macdonald of Harvard and Sara Pruss of Smith, trekked to northern Namibia and Mongolia to sample cap-carbonate rocks — the very first layers of sediment deposited after the first ice age. The team hauled the samples back to Cambridge, where Bosak dissolved the rocks in acid. She plated the residue on slides and looked for signs of fossilized life. “It’s a little bit like looking at clouds, trying to pick out shapes and seeing if anything’s consistent,” Bosak says.

Peering at the sludge through a microscope, she discovered a sea of tiny dark ovals, each with a single notch at its edge. To get a closer look, Bosak used scanning electron microscopy to create high-resolution, three-dimensional images, revealing hollow, 10-micron-thick shells. Fossils from Namibia were mostly round; those from Mongolia, more tube-like. Most fossils contained a slit or neck at one end, from which the organism’s pseudopodia, or feet, may have protruded.

Bosak analyzed the shells’ composition using X-ray spectroscopy, finding a rough patchwork of silica, aluminum and potassium particles that the organism likely plucked from the environment and glued to its surface.

Bosak says these single-celled microbes may have evolved the ability to build shells to protect against an extreme deep-ocean environment, as well as a potentially growing population of single-celled species, some of which may have preyed on other organisms.

“We can now say there really were these robust organisms immediately after the first glaciation,” Bosak says. “Having opened this kind of window, we’re finding all kinds of organisms related to modern organisms.”

The closest modern relative may be testate amoebae, single-celled microbes found in forests, lakes and peat bogs. These tiny organisms have been known to collect particles of silica, clay minerals, fungi and pollen, cementing them into a hard cloak or shell. Bosak says testate amoebae were extremely abundant before the first Snowball Earth, although there is no robust evidence that the plentiful protist evolved its shell-building mechanism until after that ice age.

Bosak’s guess is that the post-glacial environment was a “brine” teeming with organisms and newly evolved traits. She says the group plans to return to Mongolia to sample more rocks from the same time period, and hopes other researchers will start to investigate rates of evolutionary change in similar rocks.

Andrew Knoll, the Fisher Professor of Natural History and professor of earth and planetary sciences at Harvard, says the group’s findings point to a potentially rich source of information about the kinds of life able to persist between glacial periods.

“To date, we’ve known very little about life between the two large ice ages,” Knoll says. “With this in mind, the new discoveries are truly welcome.”