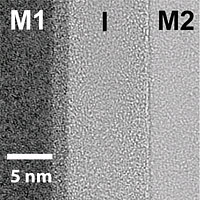 This image of an asymmetric MIM diode reflects a major advance in materials science that could lead to less costly and higher speed electronic products.

Researchers at Oregon State University have solved a quest in fundamental material science that has eluded scientists since the 1960s, and could form the basis of a new approach to electronics.

The discovery, just reported online in the professional journal Advanced Materials, outlines the creation for the first time of a high-performance “metal-insulator-metal” diode.

“Researchers have been trying to do this for decades, until now without success,” said Douglas Keszler, a distinguished professor of chemistry at OSU and one of the nation’s leading material science researchers. “Diodes made previously with other approaches always had poor yield and performance.

“This is a fundamental change in the way you could produce electronic products, at high speed on a huge scale at very low cost, even less than with conventional methods,” Keszler said. “It’s a basic way to eliminate the current speed limitations of electrons that have to move through materials.”

A patent has been applied for on the new technology, university officials say. New companies, industries and high-tech jobs may ultimately emerge from this advance, they say.

The research was done in the Center for Green Materials Chemistry, and has been supported by the National Science Foundation, the Army Research Laboratory and the Oregon Nanoscience and Microtechnologies Institute.

Conventional electronics made with silicon-based materials work with transistors that help control the flow of electrons. Although fast and comparatively inexpensive, this approach is still limited by the speed with which electrons can move through these materials. And with the advent of ever-faster computers and more sophisticated products such as liquid crystal displays, current technologies are nearing the limit of what they can do, experts say.

By contrast, a metal-insulator-metal, or MIM diode can be used to perform some of the same functions, but in a fundamentally different way. In this system, the device is like a sandwich, with the insulator in the middle and two layers of metal above and below it. In order to function, the electron doesn’t so much move through the materials as it “tunnels” through the insulator – almost instantaneously appearing on the other side.

“When they first started to develop more sophisticated materials for the display industry, they knew this type of MIM diode was what they needed, but they couldn’t make it work,” Keszler said. “Now we can, and it could probably be used with a range of metals that are inexpensive and easily available, like copper, nickel or aluminum. It’s also much simpler, less costly and easier to fabricate.”

The findings were made by researchers in the OSU Department of Chemistry; School of Electrical Engineering and Computer Science; and School of Mechanical, Industrial and Manufacturing Engineering.

In the new study, the OSU scientists and engineers describe use of an “amorphous metal contact” as a technology that solves problems that previously plagued MIM diodes. The OSU diodes were made at relatively low temperatures with techniques that would lend themselves to manufacture of devices on a variety of substrates over large areas.

OSU researchers have been leaders in a number of important material science advances in recent years, including the field of transparent electronics. University scientists will do some initial work with the new technology in electronic displays, but many applications are possible, they say.

High speed computers and electronics that don’t depend on transistors are possibilities. Also on the horizon are “energy harvesting” technologies such as the nighttime capture of re-radiated solar energy, a way to produce energy from the Earth as it cools during the night.

“For a long time, everyone has wanted something that takes us beyond silicon,” Keszler said. “This could be a way to simply print electronics on a huge size scale even less expensively than we can now. And when the products begin to emerge the increase in speed of operation could be enormous.”