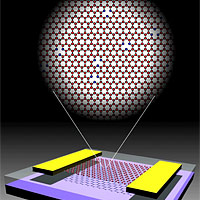 University of Maryland researchers have discovered a way to control magnetic properties of graphene that could lead to powerful new applications in magnetic storage and magnetic random access memory.

The finding by a team of Maryland researchers, led by Physics Professor Michael S. Fuhrer of the UMD Center for Nanophysics and Advanced Materials is the latest of many amazing properties discovered for graphene.

A honeycomb sheet of carbon atoms just one atom thick, graphene is the basic constituent of graphite. Some 200 times stronger than steel, it conducts electricity at room temperature better than any other known material (a 2008 discovery by Fuhrer, et. al). Graphene is widely seen as having great, perhaps even revolutionary, potential for nanotechnology applications. The 2010 Nobel Prize in physics was awarded to scientists Konstantin Novoselov and Andre Geim for their 2004 discovery of how to make graphene.

In their new graphene discovery, Fuhrer and his University of Maryland colleagues have found that missing atoms in graphene, called vacancies, act as tiny magnets -- they have a 'magnetic moment.' Moreover, these magnetic moments interact strongly with the electrons in graphene which carry electrical currents, giving rise to a significant extra electrical resistance at low temperature, known as the Kondo effect. The results appear in the paper 'Tunable Kondo effect in graphene with defects' published this month in Nature Physics.

'First, we were studying a system of nothing but carbon, without adding any traditionally magnetic impurities. Second, graphene has a very small electron density, which would be expected to make the Kondo effect appear only at extremely low temperatures,' he said.

The team measured the characteristic temperature for the Kondo effect in graphene with vacancies to be as high as 90 Kelvin, which is comparable to that seen in metals with very high electron densities. Moreover the Kondo temperature can be tuned by the voltage on an electrical gate, an effect not seen in metals. They theorize that the same unusual properties of that result in graphene's electrons acting as if they have no mass also make them interact very strongly with certain kinds of impurities, such as vacancies, leading to a strong Kondo effect at a relatively high temperature.

Fuhrer thinks that if vacancies in graphene could be arranged in just the right way, ferromagnetism could result. 'Individual magnetic moments can be coupled together through the Kondo effect, forcing them all to line up in the same direction,' he said.

'The result would be a ferromagnet, like iron, but instead made only of carbon. Magnetism in graphene could lead to new types of nanoscale sensors of magnetic fields. And, when coupled with graphene's tremendous electrical properties, magnetism in graphene could also have interesting applications in the area of spintronics, which uses the magnetic moment of the electron, instead of its electric charge, to represent the information in a computer.

'This opens the possibility of 'defect engineering' in graphene - plucking out atoms in the right places to design the magnetic properties you want,' said Fuhrer.

This research was supported by grants from the National Science Foundation and the Office of Naval Research.