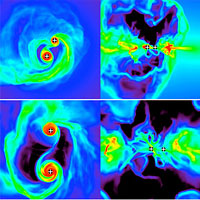 Computer simulation of the formation of a massive star yielded these snapshots showing stages in the process over time. Panels on the left represent a polar view (the axis of rotation is perpendicular to the plane of the image), and panels on the right represent an equatorial view. Plus signs indicate projected positions of stars. Colors represent density. Images by Krumholz et al.

Theorists have long wondered how massive stars--up to 120 times the mass of the Sun--can form without blowing away the clouds of gas and dust that feed their growth. But the problem turns out to be less mysterious than it once seemed. A study published this week by Science shows how the growth of a massive star can proceed despite outward-flowing radiation pressure that exceeds the gravitational force pulling material inward.

The new findings also explain why massive stars tend to occur in binary or multiple star systems, said lead author Mark Krumholz, an assistant professor of astronomy and astrophysics at the University of California, Santa Cruz. The formation of companion stars emerged unexpectedly from the sophisticated computer simulations the researchers used to explore the physics of massive star formation.

'We didn't set out to solve that question, so it was a nice side benefit of the study,' Krumholz said. 'The main finding is that radiation pressure does not limit the growth of massive stars.'

'When you apply the radiation pressure from a massive star to the dusty interstellar gas around it, which is much more opaque than the star's internal gas, it should explode the gas cloud,' Krumholz said. Earlier studies suggested that radiation pressure would blow away the raw materials of star formation before a star could grow much larger than about 20 times the mass of the Sun. Yet astronomers observe stars much more massive than that.

Krumholz and his coauthors at UC Berkeley and Lawrence Livermore National Laboratory have spent years developing complex computer codes for simulating the processes of star formation. Combined with advances in computer technology, their latest software (called ORION) enabled them to run a detailed three-dimensional simulation of the collapse of an enormous interstellar gas cloud to form a massive star. The project required months of computing time at the San Diego Supercomputer Center.

The simulation showed that as the dusty gas collapses onto the growing core of a massive star, with radiation pressure pushing outward and gravity pulling material in, instabilities develop that result in channels where radiation blows out through the cloud into interstellar space, while gas continues falling inward through other channels.

'You can see fingers of gas falling in and radiation leaking out between those fingers of gas,' Krumholz said. 'This shows that you don't need any exotic mechanisms; massive stars can form through accretion processes just like low-mass stars.'

The rotation of the gas cloud as it collapses leads to the formation of a disk of material feeding onto the growing 'protostar.' The disk is gravitationally unstable, however, causing it to clump and form a series of small secondary stars, most of which end up colliding with the central protostar. In the simulation, one secondary star became massive enough to break away and acquire its own disk, growing into a massive companion star. A third small star formed and was ejected into a wide orbit before falling back in and merging with the primary star.

When the researchers stopped the simulation, after allowing it to evolve for 57,000 years of simulated time, the two stars had masses of 41.5 and 29.2 times the mass of the Sun and were circling each other in a fairly wide orbit.

'What formed in the simulation is a common configuration for massive stars,' Krumholz said. 'I think we can now consider the mystery of how massive stars are able to form to be solved. The age of supercomputers and the ability to simulate the process in three dimensions made the solution possible.'

The paper describing these results is being published by Science on the Science Express web site on January 15, 2009. In addition to Krumholz, the coauthors are Richard Klein, Christopher McKee, and Stella Offner of UC Berkeley, and Andrew Cunningham of Lawrence Livermore National Laboratory.

This research was funded by the National Science Foundation, NASA, and the U.S. Department of Energy.