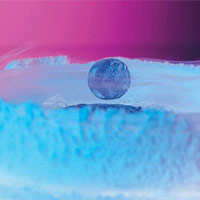 This photo shows a magnet levitating above a high-temperature superconductor, cooled with liquid nitrogen. A persistent electric current flows on the surface of the superconductor, effectively forming an electromagnet that repels the magnet. The expulsion of an magnetic field from a superconductor is known as the 'Meissner Effect.'

A new material with a split personality -- part superconductor, part metal -- has been observed by a Princeton University-led research team. The discovery may have implications for the development of next-generation electronics that could transform the way information is stored and processed.

The new material -- a crystal called a topological superconductor -- has two electronic identities at once. At very low temperatures, the interior of the crystal behaves like a normal superconductor, able to conduct electricity with zero resistance. At the same time, the surface is metallic, able to carry a current, albeit with some resistance.

This is in direct contrast to most existing materials that are classified as electronic states of matter, including metals, insulators and conventional superconductors, which are consistent in how they do, or don't, conduct electricity. For example, every single atom of every single copper wire is able to carry a current, which dissipates a bit as it travels. Similarly, all the molecules in normal superconductors conduct electricity without resistance when the material is placed at the appropriate temperature.

'The known states of electronic matter are insulators, metals, magnets, semiconductors and superconductors, and each of them has brought us new technology,' said M. Zahid Hasan, an associate professor of physics at Princeton who led the research team. 'Topological superconductors are superconducting everywhere but on the surface, where they are metallic; this leads to many possibilities for applications.'

Hasan and his colleagues published their findings Nov. 1 in the journal Nature Physics.

According to Hasan, one of the most exciting potential uses for the material would be in energy-efficient quantum computers that would have the ability to identify errors in calculation as they occur and resist them during processing. The successful development of such machines is thought to hinge on catching and manipulating elusive particles called Majorana fermions, which were first predicted more than 70 years ago but never before observed, Hasan explained. The split electronic personality of the new superconductors with unusual surface properties, when placed in contact with a special kind of insulator, may enable scientists to coax the electrons whizzing about on the surface to become Majorana fermions, he added.

'These highly unusual superconductors are the most ideal nurseries to create and manipulate Majorana fermions, which could be used to do quantum computing in a fault-resistant way,' said L. Andrew Wray, the first author of the paper, who received his doctoral degree from Princeton in 2010. 'And because the particles would exist on a superconductor, it could be possible to manipulate them in low power-consumption devices that are not only 'green,' but also immune to the overheating problems that befall current silicon-based electronics.'

The significant caveat is that any potential application could be several decades in development.

'Of course, it takes time to go from new physics to new technology -- usually 20 to 30 years, as was the case with semiconductors,' Hasan said.
Initial find of insulators begins path to discovery

Quantum computers store and process information using the 'quantum' behavior of subatomic particles -- phenomena that occur on the ultrasmall scale and are completely at odds with the world that can be seen by the naked eye, such as the ability of electrons to be in two different places at the same time. Quantum computers could one day enable the manipulation of data at speeds that far exceed today's conventional machines, which are rapidly approaching the fundamental limits of their computing capabilities.

However, efforts to create higher-performing quantum computers have been hampered by the notoriously fickle and unpredictable behavior of particles on the quantum scale.

For the past two years, Hasan and his collaborators have been tweaking the properties of a topological insulator called bismuth selenide to create a material with a metallic surface and a superconducting interior, which would have properties well suited to exploitation in the electronics of the future.

To make a superconductor with topological behavior, or unusual surface properties, Princeton chemistry professor Robert Cava and his research group invented a new kind of crystal by inserting atoms of copper into the atomic lattice structure of a semiconductor made out of the compound bismuth selenide. This process, called intercalation doping, is a method used to change the number of electrons in a material and tweak its electrical properties.

The scientists discovered that, with the right amount of doping, they were able to turn the crystal into a superconductor at very low temperatures -- below 4 degrees Kelvin, or around -452 degrees Fahrenheit. However, initial laboratory-based results suggested that the superconductor cannot retain topological properties indefinitely, though they do persist for months if the material is kept in a vacuum.

To assess the topological characteristics of the material, the researchers used a technique known as X-ray spectroscopy to bombard the crystal with X-rays and 'pop' individual electrons out of the material. These electrons were then analyzed, providing a series of clues that allowed the team to determine the true nature of the crystal.

These X-ray tests discovered that the scientists had, indeed, created a topological superconductor. Furthermore, they found that the electrons on the crystal's metallic surface were not normal electrons. Rather, the surface featured rare electrons that act like mass-less, light particles. The scientists recognized the particles because the first direct observation of such electrons, called helical Dirac fermions, in three-dimensional materials was reported last year by a separate Hasan-led research team.

Scientific theory, by physicist Charles Kane of the University of Pennsylvania, predicts that if a topological superconductor were to be placed in contact with a topological insulator, some of the electrons at the interface could become long-sought Majorana fermions if the composite material were placed into a very strong magnetic field.

The particles are desirable in electronic devices because, while normal electrons have a negative charge, Majorana fermions are neutral. This charge-less nature means that they wouldn't interact with each other, nor would they be affected by the other charges on the surrounding atoms that make up the crystal.

Because the fermions would not be attracted or repelled by nearby particles and atoms, they would travel in very predictable, predetermined paths -- and this is where their true potential lies.

If the motion of multiple Majorana fermions could be predicted, then topological quantum computers that stored information in these particles could be fault-tolerant, or resistant to errors, he explained. This could be further extended to design methods that would enable the computer to 'know' that it had performed a calculation wrong and correct for the error.

'There are many different types of topological superconductors and the exact identification of the current superconductors will require further experiments,' Hasan added.

In addition to Hasan, Cava and Wray, who is now a postdoctoral fellow at the Advanced Light Source facility at the Lawrence Berkeley National Laboratory, Princeton scientists on the team included: graduate student Su-Yang Xu; former postdoctoral researchers Yew San Hor and Dong Qian; and Yuqi Xia, who received his doctoral degree from Princeton in 2010. Additional researchers on the team included Alexei Fedorov of the Advanced Light Source at Berkeley Lab and Hsin Lin and Arun Bansil, both of Northeastern University.

'This is an exciting result by Zahid Hasan and coworkers that builds on his previous experimental discovery of the first three-dimensional topological state of matter, the topological insulator,' said Joel Moore, an associate professor of physics at University of California-Berkeley and a member of Princeton's class of 1995.

'Theorists believe that if a topological insulator can be made superconducting, the resulting state would have several remarkable properties,' Moore said. 'The most exotic might be the existence of a new kind of emergent particle, the Majorana fermion … . We have known for some time that solids made up of ordinary nuclei and electrons can host 'emergent' particles with stranger properties, such as fractional charge, but the Majorana fermion, which has zero mass and zero charge, might be the strangest of all. While no single measurement can confirm the existence of topological superconductivity, the work by Hasan is a considerable step in the right direction.'

The research was funded by the U.S. Department of Energy, a National Science Foundation American Competitiveness and Innovation Fellowship and the Alfred P. Sloan Foundation.