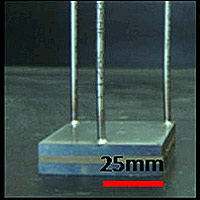 A 'multilayer micromixer' production process developed at Oregon State University allows a much higher production rate of nanotech particles than conventional approaches, with no loss of quality.

Engineers at Oregon State University have discovered a new method to speed the production rate of nanoparticles by 500 times, an advance that could play an important role in making nanotechnology products more commercially practical.

The approach uses an arrayed microchannel reactor and a “laminated architecture” in which many sheets, each with thousands of microchannels in them, are stacked in parallel to provide a high volume of production and excellent control of the processes involved.

Applications could be possible in improved sensors, medical imaging, electronics, and even solar energy or biomedical uses when the same strategy is applied to abundant materials such as copper, zinc or tin.

A patent has been applied for, university officials say. The work, just published in the journal Nanotechnology, was done in the research group of Brian Paul, a professor in the OSU School of Mechanical, Industrial and Manufacturing Engineering.

“A number of new and important types of nanoparticles have been developed with microtechnology approaches, which often use very small microfluidic devices,” said Chih-hung Chang, a professor in the OSU School of Chemical, Biological and Environmental Engineering, and principal investigator on the study.

“It had been thought that commercial production might be as simple as just grouping hundreds of these small devices together,” Chang said. “But with all the supporting equipment you need, things like pumps and temperature controls, it really wasn’t that easy. Scaling things up to commercial volumes can be quite challenging.”

The new approach created by a research team of five engineers at OSU used a microreactor with the new architecture that produced “undecagold nanoclusters” hundreds of times faster than conventional “batch synthesis” processes that might have been used.

“In part because it’s faster and more efficient, this process is also more environmentally sensitive, using fewer solvents and less energy,” Chang said. “This could be very significant in helping to commercialize nanotech products, where you need high volumes, high quality and low costs.”

This research, Chang said, created nanoparticles based on gold, but the same concept should be applicable to other materials as well. By lowering the cost of production, even the gold nanoclusters may find applications, he said, because the cost of the gold needed to make them is actually just a tiny fraction of the overall cost of the finished product.

Nanoparticles are extraordinarily tiny groups of atoms and compounds that, because of their extremely small size and large surface areas, can have unusual characteristics that make them valuable for many industrial, electronic, medical or energy applications.

This work was supported by the Safer Nanomaterials and Nanomanufacturing Initiative of the Oregon Nanoscience and Microtechnologies Institute, or ONAMI. Funding was also provided by the Air Force Research Laboratory and the W.M. Keck Foundation.