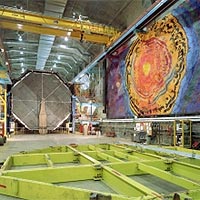 The groundbreaking for the cavern of the MINOS far detector, deep within Minnesota's Soudan iron mine, was on July 20, 1999. The excavation of the cavern took about two years, followed by the two-year construction of the detector. The University of Minnesota Foundation commissioned a mural for the MINOS cavern, painted onto the rock wall, 59 feet wide by 25 feet high. The mural contains images of scientists such as Enrico Fermi and Wolfgang Pauli, Wilson Hall at Fermilab, George Shultz, a key figure in the history of Minnesota mining, and some surprises.

An international consortium of 200-plus scientists, engineers, technical specialists and students has formally inaugurated an ambitious new effort to probe the secrets of neutrinos, the elusive subatomic particles that have played a central role in the origin of the universe, the evolution of the Sun, and much else.

Where do neutrinos come from? What are their masses? And how do they change from one kind to another? The researchers will attempt to answer such questions with the newly completed NuMI-MINOS experiment, which will send pulses of neutrinos on a 450-mile path through the Earth.

NuMI stands for Neutrinos at the Main Injector, the facility that produces the neutrino beam at the Fermi National Accelerator Laboratory in Batavia, Illinois, outside Chicago. MINOS refers to a pair of huge underground particle detectors that together comprise the Main Injector Neutrino Oscillation Search. One, the 1000-ton MINOS near detector at Fermilab, will monitor the neutrino beam as it heads outward. The other, the 6,000-ton MINOS far detector located a half-mile underground in the Soudan iron mine of northeastern Minnesota, will serve as the final target.

The detectors' job won’t be easy. Because neutrinos interact so rarely, trillions of them will pass through the MINOS near detector each year, but only about 1,500 per year will collide with atoms inside the detector and produce a signal. The rest will pass right through with no effect. It will be much the same story in Minnesota as in Illinois. Nonetheless, the detector there should be able to tell if some fraction of the neutrinos have changed from one kind to another during the 2.5-millisecond trip. MINOS scientists will then use the change from one type of neutrino to another as the key to discovering neutrinos’ secrets.

The Department of Energy provides the major share of funding for NuMI-MINOS project, with additional support coming from the National Science Foundation (NSF) and from the United Kingdom’s Particle Physics and Astronomy Research Council.

'Neutrinos are always referred to as ghostly particles, as if they are of little interest and have to be apologized for,” Turner says.  “Nothing could be further from the truth. Neutrinos account for as much of the mass of the universe as do stars, they play a crucial role in the production of the chemical elements in the explosions of stars, and they may well explain the origin of the neutrons, protons and electrons that are the building blocks of all the atoms in the universe.  MINOS will help us better understand how neutrinos shaped the universe we live in.'