Telling Time on the Moon 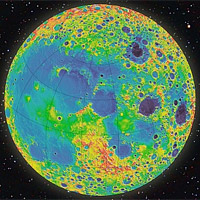 Ever since the solar system formed roughly five billion years ago, a steady barrage of asteroids, comets and other rocky material has pummeled the surfaces of planetary bodies. Earth’s surface shows little evidence of these so-called “impactors” thanks to weather, erosion and other geological processes that have altered Earth’s crust over time.

But it’s a different story for the moon, where the lack of erosion and Earthlike tectonic activity has left the lunar surface pockmarked with billions of craters. Because these craters are like fingerprints of the impactors that made them, planetary scientists study lunar craters for clues about the massive objects that bombarded the planets during the early solar system.

Now, for the first time, a team of researchers from MIT, Brown University and NASA’s Goddard Space Flight Center has mapped the entire surface of the moon, producing a catalog of every crater larger than 20 kilometers in diameter — 5,185 craters in all. As the researchers report in a paper published Friday in Science, this comprehensive catalog has allowed them to identify two regions of the lunar surface that are likely the oldest and would therefore be the most promising targets for missions to collect rock samples.

To produce the catalog, the researchers analyzed data collected by NASA’s Lunar Reconnaissance Orbiter (LRO) spacecraft, which has been orbiting the moon since June 2009. Onboard the LRO is an instrument known as the Lunar Orbiter Laser Altimeter (LOLA), which bounces laser beams off the lunar surface to measure its topography. The instrument has taken 2.4 billion measurements to date, and the LOLA team has used this data to count and characterize large craters.

Although most of the lunar surface had previously been mapped, those data were inconsistent because they were collected by different instruments at different resolution and different lighting geometries. “[This] takes mapping to another level with the accuracy of the data points and the spatial resolution,” says co-author Maria Zuber, head of MIT’s Department of Earth, Atmospheric and Planetary Sciences.

As a result of volcanic processes and material caused by impacts that have resurfaced the moon, some parts of the lunar surface are older than others. Scientists can estimate the age of these surfaces thanks to samples collected during the Apollo missions and subsequently dated in the lab. By counting the number of craters blanketing the region for which they have an estimated age, scientists have found a link between the age of a given region and the number of craters it has.

In their NASA-funded research, Zuber and her colleagues found two unnamed areas on the moon — one on the southern near side and the other on the north-central far side — that feature a condition known as “saturated equilibrium,” which occurs when a region becomes so densely cratered that it can’t be dated using the crater counting method. That’s because every time a new crater is formed on top of an old crater, it destroys the old crater, and this keeps the number of craters constant over time. Because the LOLA data revealed that these two regions contain more craters than anywhere else on the moon, the researchers suggest that they are likely the oldest areas of the lunar surface — they just don’t know how old.

Their analysis also addresses a major question about the types of impactors that bombarded the planets during the early solar system. For years, scientists had believed that the moon and other planets were struck by a steady ratio of large and small impactors. But in 2005, a team of planetary scientists from the University of Arizona, including Renu Malhotra, noticed that the ratio between large and small craters was greater for older regions of the moon compared to the ratio for younger regions. They believe this crater pattern indicates a change in impactor populations that occurred as a result of some major change to the asteroid belt — located between the orbits of Mars and Jupiter — nearly 4 billion years ago.

Using the new catalog, the LOLA team compared the craters that formed during the moon’s early history, when large basins were created by giant impactors, to those that formed later, when impactors bombarded the lava flows covering the basins. Their analysis revealed that the older surfaces have more large craters than small ones. This suggests that the early population of impactors had a proportionally greater number of large fragments than the later population of impactors that struck the younger regions, including the Orientale Basin, which was the last basin to form, about 3.8 billion years ago. The researchers have now dated the change in impactor populations — from one population that contained more large impactors than small ones to another that contained a higher number of small fragments — to around the time Orientale formed. Future research may investigate what was occurring in the inner solar system around that time.

Malhotra says the new data set supports her group’s theory, and she hopes the catalog will be made public so researchers not on the LOLA team can study the craters to learn new details about the moon, such as how their changing nature may be linked to the change in the moon’s orbit over time.

Zuber and her colleagues continue to analyze the continuously collected LOLA data and hope to address many unanswered questions about the moon, including whether water-ice exists inside deep craters located at the permanently shadowed polar regions.