NASA Launches Mission to Study Moon From Crust to Core 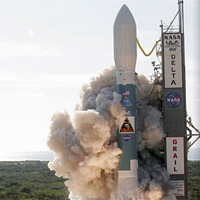 NASA's GRAIL spacecraft successfully launched from Cape Canaveral Air Force Station, Fla., at 9:08 EDT (6:08 PDT) on Sept. 10, 2011. As depicted in the artist's concept on the right, the twin spacecraft, GRAIL-A and GRAIL-B will work in tandem to study the lunar interior, from crust to core, and to advance understanding of the thermal evolution of the moon. Image credit: NASA/JPL-Caltech/Thom Baur, United Launch Alliance

GRAIL-A is scheduled to reach the moon on New Year's Eve 2011, while GRAIL-B will arrive New Year's Day 2012. The two solar-powered spacecraft will fly in tandem orbits around the moon to measure its gravity field. GRAIL will answer longstanding questions about the moon and give scientists a better understanding of how Earth and other rocky planets in the solar system formed.

'If there was ever any doubt that Florida's Space Coast would continue to be open for business, that thought was drowned out by the roar of today's GRAIL launch,' said NASA Administrator Charles Bolden. 'GRAIL and many other exciting upcoming missions make clear that NASA is taking its next big leap into deep space exploration, and the space industry continues to provide the jobs and workers needed to support this critical effort.'

The spacecraft were launched aboard a United Launch Alliance Delta II rocket. GRAIL mission controllers acquired a signal from GRAIL-A at 10:29 a.m. EDT (7:29 a.m. PDT). GRAIL-B's signal was received eight minutes later. The telemetry downlinked from both spacecraft indicates they have deployed their solar panels and are operating as expected.

'Our GRAIL twins have Earth in their rearview mirrors and the moon in their sights,' said David Lehman, GRAIL project manager at NASA's Jet Propulsion Laboratory in Pasadena, Calif. 'The mission team is ready to test, analyze and fine-tune our spacecraft over the next three-and-a-half months on our journey to lunar orbit.'

The straight-line distance from Earth to the moon is approximately 250,000 miles (402,336 kilometers). NASA's Apollo moon crews needed approximately three days to cover that distance. However, each spacecraft will take approximately 3.5 months and cover more than 2.5 million miles (4 million kilometers) to arrive. This low-energy trajectory results in the longer travel time. The size of the launch vehicle allows more time for spacecraft check-out and time to update plans for lunar operations. The science collection phase for GRAIL is expected to last 82 days.

'Since the earliest humans looked skyward, they have been fascinated by the moon,' said GRAIL principal investigator Maria Zuber from the Massachusetts Institute of Technology in Cambridge. 'GRAIL will take lunar exploration to a new level, providing an unprecedented characterization of the moon's interior that will advance understanding of how the moon formed and evolved.'

JPL, a division of the California Institute of Technology in Pasadena, manages the GRAIL mission. It is part of the Discovery Program managed at NASA's Marshall Space Flight Center in Huntsville, Ala. Lockheed Martin Space Systems in Denver built the spacecraft. Launch management for the mission is the responsibility of NASA's Launch Services Program at the Kennedy Space Center in Florida