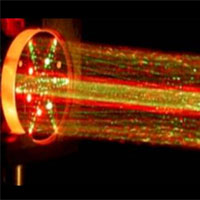 This picture shows a lab demonstration of the measurement chamber inside the Tunable Laser Spectrometer, an instrument that is part of the Sample Analysis at Mars investigation on NASA's Curiosity rover. This demonstration uses visible lasers -- rather than the infrared ones on the actual spectrometer -- to show how the lasers bounce between the mirrors in the measurement chamber.

The TLS shoots laser beams into a type of measurement chamber that can be filled with Mars air. By measuring the absorption of light at specific wavelengths, the tool can measure concentrations of methane, carbon dioxide and water vapor in the Martian atmosphere and different isotopes of those gases.

Researchers are using Curiosity's 10 instruments to investigate whether areas in Gale Crater ever offered environmental conditions favorable for microbial life. JPL, a division of the California Institute of Technology in Pasadena, manages the project for NASA's Science Mission Directorate, Washington, and built Curiosity. The SAM instrument was developed at Goddard with instrument contributions from Goddard, JPL and the University of Paris in France.

Data from NASA's Curiosity rover has revealed the Martian environment lacks methane. This is a surprise to researchers because previous data reported by U.S. and international scientists indicated positive detections.

The roving laboratory performed extensive tests to search for traces of Martian methane. Whether the Martian atmosphere contains traces of the gas has been a question of high interest for years because methane could be a potential sign of life, although it also can be produced without biology.

'This important result will help direct our efforts to examine the possibility of life on Mars,' said Michael Meyer, NASA's lead scientist for Mars exploration. 'It reduces the probability of current methane-producing Martian microbes, but this addresses only one type of microbial metabolism. As we know, there are many types of terrestrial microbes that don't generate methane.'

Curiosity analyzed samples of the Martian atmosphere for methane six times from October 2012 through June and detected none. Given the sensitivity of the instrument used, the Tunable Laser Spectrometer, and not detecting the gas, scientists calculate the amount of methane in the Martian atmosphere today must be no more than 1.3 parts per billion. That is about one-sixth as much as some earlier estimates. Details of the findings appear in the Thursday edition of Science Express.

'It would have been exciting to find methane, but we have high confidence in our measurements, and the progress in expanding knowledge is what's really important,' said the report's lead author, Chris Webster of NASA's Jet Propulsion Laboratory in Pasadena, Calif. 'We measured repeatedly from Martian spring to late summer, but with no detection of methane.'

Webster is the lead scientist for spectrometer, which is part of Curiosity's Sample Analysis at Mars (SAM) laboratory. It can be tuned specifically for detection of trace methane. The laboratory also can concentrate any methane to increase the gas' ability to be detected. The rover team will use this method to check for methane at concentrations well below 1 part per billion.

Methane, the most abundant hydrocarbon in our solar system, has one carbon atom bound to four hydrogen atoms in each molecule. Previous reports of localized methane concentrations up to 45 parts per billion on Mars, which sparked interest in the possibility of a biological source on Mars, were based on observations from Earth and from orbit around Mars. However, the measurements from Curiosity are not consistent with such concentrations, even if the methane had dispersed globally.

'There's no known way for methane to disappear quickly from the atmosphere,' said one of the paper's co-authors, Sushil Atreya of the University of Michigan, Ann Arbor. 'Methane is persistent. It would last for hundreds of years in the Martian atmosphere. Without a way to take it out of the atmosphere quicker, our measurements indicate there cannot be much methane being put into the atmosphere by any mechanism, whether biology, geology, or by ultraviolet degradation of organics delivered by the fall of meteorites or interplanetary dust particles.'

The highest concentration of methane that could be present without being detected by Curiosity's measurements so far would amount to no more than 10 to 20 tons per year of methane entering the Martian atmosphere, Atreya estimated. That is about 50 million times less than the rate of methane entering Earth's atmosphere.

Curiosity landed inside Gale Crater on Mars in August 2012 and is investigating evidence about habitable environments there. JPL manages the mission and built the rover for NASA's Science Mission Directorate in Washington. The rover's Sample Analysis at Mars suite of instruments was developed at NASA's Goddard Space Flight Center in Greenbelt, Md., with instrument contributions from Goddard, JPL and the University of Paris in France.