Understanding a new kind of magnetism 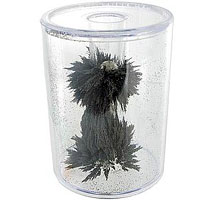 This plastic tube with iron filings enables one to visualize magnetic fields around an included Alnico magnet. By moving the Alnico (Aluminum-Nickel-Cobalt) cow magnet inside the tube hole iron filings will string together to form visible 3D structures in the shapes of the magnetic field lines.

Using low-frequency laser pulses, a team of researchers has carried out the first measurements that reveal the detailed characteristics of a unique kind of magnetism found in a mineral called herbertsmithite.

In this material, the magnetic elements constantly fluctuate, leading to an exotic state of fluid magnetism called a “quantum spin liquid.” This is in contrast to conventional magnetism, found in materials called ferromagnets — where all of the magnetic forces align in the same direction, reinforcing each other — or antiferromagnets, where adjacent magnetic elements align in opposite directions, leading to complete cancellation of the material’s overall magnetic field.

Although a spin-liquid state has previously been observed in herbertsmithite, there has never been a detailed analysis of how the material’s electrons respond to light — a key to determining which of several competing theories about the material is correct.

Now a team at MIT, Boston College and Harvard University has successfully carried out these measurements. The new analysis is reported in a paper in Physical Review Letters, co-authored by Nuh Gedik, the Biedenharn Career Development Associate Professor of Physics at MIT, graduate student Daniel Pilon, postdoc Chun Hung Lui and four others.

Their measurements, using laser pulses lasting just a trillionth of a second, reveal a signature in the optical conductivity of the spin-liquid state that reflects the influence of magnetism on the motion of electrons. This observation supports a set of theoretical predictions that have not previously been demonstrated experimentally. “We think this is good evidence,” Gedik says, “and it can help to settle what has been a pretty big debate in spin-liquid research.”

“Theorists have provided a number of theories on how a spin-liquid state could be formed in herbertsmithite,” Pilon explains. “But to date there has been no experiment that directly distinguishes among them. We believe that our experiment has provided the first direct evidence for the realization of one of these theoretical models in herbertsmithite.”

The concept of quantum spin liquids was first proposed in 1973, but the first direct evidence for such a material was only found within the last few years. The new measurements help to clarify the fundamental characteristics of this exotic system, which is thought to be closely related to the origins of high-temperature superconductivity.

Gedik says, “Although it is hard to predict any potential applications at this stage, basic research on this unusual phase of matter could help us to solve some very complicated problems in physics, particularly high-temperature superconductivity, which might eventually lead to important applications.” In addition, Pilon says, “This work might also be useful for the development of quantum computing.”

Leon Balents, a professor of physics at the University of California at Santa Barbara who was not involved in this work, says, “If the observed optical conductivity in these measurements is truly intrinsic, it is an important and exciting result, which will be very important in understanding the nature of the spin-liquid state.”

Balents adds that further work is needed to confirm this result, but says “this is clearly an exciting and important measurement, which I hope will be pursued further by extending the frequency and magnetic field range in the future.”

The work was supported by the U.S. Department of Energy, and also included Young Lee and Tian-Heng Han of MIT, David Shrekenhamer and Willie J. Padilla of Boston College, and graduate student Alex J. Frenzel of MIT and Harvard.