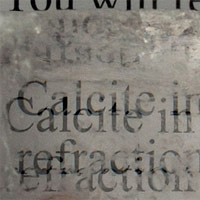 This image shows a calcite crystal laid upon a paper, causing all the letters to show double refraction.

The idea of being able to become invisible, especially by simply covering up a person or an object with a special cloak, has a perennial appeal in science-fiction and fantasy literature. In recent years, researchers have found ways to make very exotic “metamaterials” that can perform a very crude version of this trick, keeping an object from being detected by a certain specific frequency of radiation, such as microwaves, and only working at microscopic scales. But a system that works in ordinary visible light and for objects big enough to be seen with the naked eye has remained elusive.

Now, a team of researchers in the Singapore-MIT Alliance for Research and Technology (SMART) Centre has found a relatively simple, inexpensive system that can hide an object as big as a peppercorn from view in ordinary visible light. The team’s discovery has been published online in Physical Review Letters and will appear soon in the print version of the journal.

Unlike the other attempts to produce invisibility by constructing synthetic layered materials, the new method uses an ordinary, common mineral called calcite — a crystalline form of calcium carbonate, the main ingredient in seashells. “Very often, the obvious solution is just sitting there,” says MIT mechanical-engineering professor George Barbastathis, one of the new report’s co-authors.

In the experiment reported in this paper, the system works in a very carefully controlled setting: The object to be hidden (a metal wedge in the experiment, or anything smaller than it) is placed on a flat, horizontal mirror, and a layer of calcite crystal — made up of two pieces with opposite crystal orientations, glued together — is placed on top of it. When illuminated by visible light and viewed from a certain direction, the object under the calcite layer “disappears,” and the observer sees the scene as if there was nothing at all on top of the mirror.

For their demonstration, they placed the MIT logo upside-down on the vertical wall behind the apparatus, placed so that one of the letters could be viewed directly via the mirror, while the other two were behind the area with a 2-millimeter-high wedge (the height of a peppercorn) and its concealing layer of calcite. Then, the whole setup was submerged in liquid. They showed that the logo appeared normal, as though there was no wedge but a flat mirror piece, when illuminated with visible green light. Any imperfection in the cloaking effect would have shown up as a misalignment of the letters, but there was no such anomaly; thus, the cloaking operation was proven. With blue or red illumination, the cloaking was still effective but with some slight misalignment.

Calcite has long been known to have unique optical properties, including the ability to bend (or refract) a ray of light differently depending on the light’s polarization (the orientation of its electric field); these properties can cause the phenomenon of double refraction, or seeing “doubles” when looking through calcite with regular unpolarized light. In this research, the two pieces of calcite were oriented to bend the light in such a way that the emerging beam, after going through multiple reflections and refractions, appeared to be coming directly from the original mirror at the base of the setup, rather than from the actual higher point above the hidden object. The total optical path was also preserved, which means no scientific optical instrument can possibly uncover the cloaked wedge.

Submerging the apparatus in a liquid with a carefully chosen degree of refraction preserves the illusion. Barbastathis says the setup would work without the liquid, but the light’s transition into air would cause some blurring that would make the effect less convincing.

In principle, Barbastathis says, the same method could be used in real-life situations to conceal an object from view — and the only limitation on the size of the hidden object is the size of the calcite crystal that’s available. The team paid about $1,000 for the small crystal it used, he says, but much larger ones could be used to conceal much larger objects. (The largest known natural crystal of calcite measures 7 by 7 meters, or more than 21 feet across).

For now, the system is essentially two-dimensional, limiting the cloaking effect to a narrow range of angles; outside these angles, the cloaked object is quite visible. “We do have some ideas for how to make it fully three-dimensional,” says Barbastathis, the Singapore Research Professor of Optics and Professor of Mechanical Engineering. In addition, the team would like to eliminate the need for immersing the system in liquid and make it work in air.

Aside from its obvious potential applications in defense or law enforcement, the ability to render something invisible could have uses in research, Barbastathis suggests, such as providing a way to monitor animal behavior without any visible distraction. “The important thing is that now this is out in the open, people will start to think about” how it might be used.

Coincidentally, another independent research team, based at the University of Birmingham in the UK, has also published a paper this month describing a similar method for achieving a visible-light invisibility cloak using calcite.

The MIT and Birmingham results “are two beautiful experiments. I particularly like their simplicity,” says Ulf Leonhardt, chair in theoretical physics at Scotland’s University of St. Andrews, who was the author of one of the first papers that described a metamaterial-based cloaking system. “Cloaking has been inspired by research on metamaterials,” he adds, “but, ironically, these cloaking devices are almost ‘home-made.’ Instead of sophisticated optical metamaterials that are difficult to make and have many problems of their own, they use simple calcite crystals.”

Compared to the earlier versions of cloaking systems that only worked for microscopic objects, and only when viewed using radio or infrared wavelengths, the new approach is “closer to science fiction,” Barbastathis says. “Science is usually a bit disappointing when you compare it to sci-fi,” he says, but in this case “we came one step closer” to the imaginative vision.