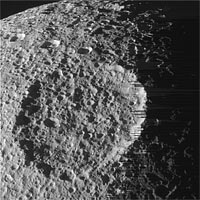 This image of Penelope crater on Saturn's moon Tethys was obtained by NASA's Cassini spacecraft on August 14, 2010

The flyby on August 13 targeted the geyser moon Enceladus, but also brought Cassini close to two other moons--Tethys and Dione.

Cassini was also able to obtain a portrait of Enceladus over the bright arc of Saturn's atmosphere and a moody still life of one of the 'tiger stripe' fissures at the Enceladus south polar region on the cusp of darkness . This particular 'tiger stripe' -- which is the nickname for the fissures spewing water vapor and organic particles out into space - is called Damascus Sulcus. It was also the subject of a heat scan by Cassini's composite infrared spectrometer. Scientists are still analyzing the results.

The Cassini-Huygens mission is a cooperative project of NASA, the European Space Agency and the Italian Space Agency. JPL, a division of the California Institute of Technology in Pasadena, manages the mission for NASA's Science Mission Directorate, Washington, D.C. The Cassini orbiter and its two onboard cameras were designed, developed and assembled at JPL. The imaging operations center is based at the Space Science Institute in Boulder, Colo.