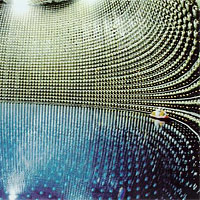 Inside view of the Super-Kamiokande (SK) neutrino detector in Japan during waterfill. 10,000 photosensors detect the light from neutrino interactions in 50,000 tons of water.

The results of a high-profile Fermilab physics experiment involving a University of Michigan professor appear to confirm strange 20-year-old findings that poke holes in the standard model, suggesting the existence of a new elementary particle: a fourth flavor of neutrino.

The new results go further to describe a violation of a fundamental symmetry of the universe asserting that particles of antimatter behave in the same way as their matter counterparts.

Neutrinos are neutral elementary particles born in the radioactive decay of other particles. The known 'flavors' of neutrinos are the neutral counterparts of electrons and their heavier cousins, muons and taus. Regardless of a neutrino's original flavor, the particles constantly flip from one type to another in a phenomenon called 'neutrino flavor oscillation.'

'These results imply that there are either new particles or forces we had not previously imagined,' said Byron Roe, professor emeritus in the Department of Physics, and an author of a paper on the results newly published online in Physical Review Letters.

'The simplest explanation involves adding new neutrino-like particles, or sterile neutrinos, which do not have the normal weak interactions.'

The three known types of neutrino interact with matter primarily through the weak nuclear force, which makes them difficult to detect. It is hypothesized that this fourth flavor would not interact through the weak force, making it even harder to find.

The existence of sterile neutrinos could help explain the composition of the universe, said William Louis, a scientist at Los Alamos National Laboratory who was a doctoral student of Roe's at U-M and is involved in the MiniBooNE experiment.

The MiniBooNE experiment, a collaboration among some 60 researchers at several institutions, was conducted at Fermilab to check the results of the Liquid Scintillator Neutrino Detector (LSND) experiment at Los Alamos National Laboratory, which started in 1990. The LSND was the first to detect more neutrino oscillations than the standard model predicted.

These new results are based on the first three years of data from an antineutrino beam, and they tell a different story than the earlier results. MiniBooNE's antineutrino beam data does support the LSND findings. And the fact that the MiniBooNE experiments produced different results for antineutrinos than for neutrinos especially astounds physicists.

'The fact that we see this effect in antineutrinos and not in neutrinos makes it even more strange,' Roe said. 'This result means even more serious additions to our standard model would be necessary than had been thought from the first LSND result.'

The result seems to violate the 'charge-parity symmetry' of the universe, which asserts that the laws of physics apply in the same ways to particles and their counterpart antiparticles. Violations of this symmetry have been seen in some rare decays, but not with neutrinos, Roe said.

While these results are statistically significant and do support the LSND findings, the researchers caution that they need results over longer periods of time, or additional experiments before physicists can rule out the predictions of the standard model.

The paper is called 'Event Excess in the MiniBooNE Search for v_ u -> v_ e Oscillations.' It will be published in an upcoming edition of Physical Review Letters.

This research is funded by Fermilab, the Department of Energy and the National Science Foundation.