The Physics of Animation 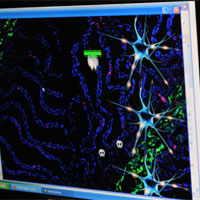 The Game Design Through Mentoring and Collaboration (GDMC) program, run by George Mason University, is designed to increase student interest in science, technology, engineering and mathematics (STEM) subjects in traditionally underserved communities. The program provides an environment in which students learn the basics of professional-level 3-D modeling and animation software as well as the logic of game design and programming. Learn more in this Discovery.

From drawings to computer animation, the magic of cartoon movies allows audiences to explore a fantastical and imaginary world. To make animated characters life-like on the big-screen, the laws of physics have to be taken into account by film makers. To be believable, every character's movements have to have the fundamentals of physics supporting them. If film makers incorporate scientific principles in the creation of the animated movie, audiences can escape reality and enter a fantasy world.

'The biggest win is when the audience feels an emotional connection to the character,' says Cassidy Curtis, a character animator for DreamWorks. 'Physics is integral to everything we do as animators because when something doesn't feel like it's physically capable of happening, it pops the audience out of the moment. It reminds the audience what they're watching isn't real.'

Sitting in front of a computer screen, he shows the early drawings and animations of Toothless, the young flying dragon in the movie 'How to Train Your Dragon.' Curtis helped develop the character that flies through explosive flames, spins out of control and falls from the sky. 'Our job is to convince the audience that, not only could that animal fly, but if he hits the ground, it will kill him,' he says.

Physicist Alejandro Garcia, a professor at San Jose State University, advises DreamWorks animators, including Curtis, to create believable characters. With physics in mind, he and other scientists help animators make dragons fly right and explosions look real. 'Anatomy is a topic that doctors study, and so do artists,' Garcia says. 'With animation, physics has become another science essential to the craft of these artists.'

Garcia also helps animators create realistic yet whacky worlds of their own. 'It's very important for animators to understand motion because that's really what they're doing, they're creating motion,' says Garcia.

Animators create worlds that aren't always a plausible fit in the natural world. Damon Riesberg, a DreamWorks animator and the head of character effects for DreamWorks' 'Megamind,' understands how to mix imagination with reality. 'Each movie, each film animation that we do has its own world of physics,' Riesberg says. 'They're slightly off from what our normal physics would be. 'Megamind's world wasn't necessarily our world.'

But other parts of 'Megamind' are much more realistic. To create the perfect cape design, animators took various capes out for a test spin. 'Our team built real capes of different fabrics, different materials, lengths and thicknesses to see what the real world physics would be,' says Riesberg.

Animators analyze the real world physics of cape behavior while running, spinning and jumping around. The tests give the animators understanding of how to create a reasonable yet individualistic cape. 'That's some of the science Garcia teaches,' says Riesberg.

Garcia's physics lessons have also taught Jason Spencer-Galsworthy, supervising animator for 'Megamind,' a few things as well. 'He explains how physics actually works,' Spencer-Galsworthy says. Garcia gives lessons about gravity to help animators figure out the speed of falling objects or how characters should shift their weight from side to side when they're running, walking or standing still.

With support from the National Science Foundation (NSF), Garcia has been able to develop a course at San Jose State University on the physics of animation. The objective is to teach animators-in-training how to make it all look plausible. Students who have taken the course say it's invaluable.

Emily Johnstone is another student who appreciates Garcia's course. 'Physics is what life is all about,' says Johnstone. 'What we're trying to capture is how life works and how things behave.'

In the classroom, Garcia analyzes a student's animation and points out subtle changes that would make the animation appear more realistic. Garcia's student, Paul Yula, says, 'There's a believability that comes into play in animation. You can stretch the rules, but you can never break the rules.'

Learning these rules could give future animators a leg up on the competition when they start the job search in the profitable movie, TV and gaming industries.

'It's a very highly skilled industry, both on the art and technology side,' says Marilyn Friedman, head of outreach and special projects at DreamWorks. 'Not every school is teaching it in the way that will set them up to succeed at a place like this.'

With physics as groundwork, prospective animators could make any imaginary world seem as authentic as our own.