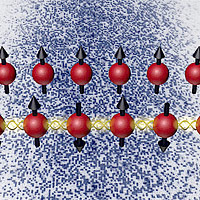 The physicists prepared a chain of single-atom magnets (red spheres with black arrows indicating north-south orientation) that repel one another, and aligned them (back row) with an external field. By reducing the field, they were able to observe reorientation (front row) caused by the magnetic repulsion (yellow helix) and minute quantum fluctuations. The background shows an image of the individual magnets, each comprising a single atom, as observed in the experiment.

Harvard physicists have expanded the possibilities for quantum engineering of novel materials such as high-temperature superconductors by coaxing ultracold atoms trapped in an optical lattice — a light crystal — to self-organize into a magnet, using only the minute disturbances resulting from quantum mechanics. The research, published in the journal Nature, is the first demonstration of such a “quantum magnet” in an optical lattice.

As modern technology depends more and more on materials with exotic quantum mechanical properties, researchers are coming up against a natural barrier.

“The problem is that what makes these materials useful often makes them extremely difficult to design,”said senior author Markus Greiner, an associate professor in Harvard’s Department of Physics. “They can become entangled, existing in multiple configurations at the same time. This hallmark of quantum mechanics is difficult for normal computers to represent, so we had to take another approach.”

That approach is using a so-called “quantum simulator” — the properties of a quantum material are simulated with an artificial quantum system that can behave similarly, but that is easier to manipulate and observe.

The physicists found that when they applied a force to a crystal formed by ultracold atoms trapped in an optical lattice, a Mott insulator, the atoms behaved like a chain of little magnets that repelled one another, in the presence of an external magnetic field that sought to align them.

“When the external magnetic field was strong, all of the magnets aligned to it, forming a paramagnet,” said co-author Jonathan Simon, a postdoctoral fellow in physics. “When we reduced the magnetic field, the magnets spontaneously anti-aligned to their neighbors, producing an antiferromagnet.”

While such self-organization is common in everyday materials, it typically depends on temperature to jostle the system into the new order, like shaking a Boggle game to help the dice settle, the researchers say. “But the temperature was so low that thermal fluctuations were absent,” explained Simon. “Our fluctuations arose from quantum mechanics.”

When quantum mechanics takes over, things get bizarre. “Quantum fluctuations can make the magnets point in multiple directions simultaneously,” Greiner said. “This ‘quantum weirdness’ gives rise to many of the fascinating properties of quantum magnets.”

Greiner and his colleagues used a quantum gas microscope to observe individual magnets at temperatures of one billionth of a degree above absolute zero (-273 Celsius). They were able to watch as quantum fluctuations flipped the magnets around, turning a paramagnet into an antiferromagnet and back again.

“Observing quantum magnetism in a cold gas is a crucial first step toward quantum simulation of real magnetic materials,” Greiner said. “There remain many exciting questions to answer, and we have only just scratched the surface. By studying the bizarre and wonderful ways that quantum mechanics works, we open new perspectives not only for developing novel high-tech materials, but also for quantum information processing and computation.”

Greiner and Simon’s co-authors are Waseem Bakr, Ruichao Ma, Eric Tai, and Philipp Preiss, all in the University’s Physics Department. Their work was supported by the Army Research Office through the DARPA OLE program, the Air Force Office of Scientific Research MURI program, and by grants from the National Science Foundation (NSF).