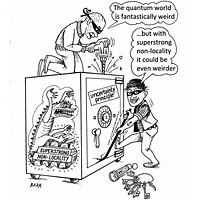 Researchers have uncovered a fundamental link between the two defining properties of quantum physics. Stephanie Wehner of Singapore's Centre for Quantum Technologies and the National University of Singapore and Jonathan Oppenheim of the United Kingdom's University of Cambridge published their work today (19 November 2010) in the latest edition of the journal Science. The result is being heralded as a dramatic breakthrough in our basic understanding of quantum mechanics and provides new clues to researchers seeking to understand the foundations of quantum theory. The result addresses the question of why quantum behaviour is as weird as it is-but no weirder. The strange behaviour of quantum particles, such as atoms, electrons and the photons that make up light, has perplexed scientists for nearly a century. Albert Einstein was among those who thought the quantum world was so strange that quantum theory must be wrong, but experiments have borne out the theory's predictions. One of the weird aspects of quantum theory is that it is impossible to know certain things, such as a particle's momentum and position, simultaneously. Knowledge of one of these properties affects the accuracy with which you can learn the other. This is known as the 'Heisenberg Uncertainty Principle'. Another weird aspect is the quantum phenomenon of non-locality, which arises from the better-known phenomenon of entanglement. When two quantum particles are entangled, they can perform actions that look as if they are coordinated with each other in ways that defy classical intuition about physically separated particles. Previously, researchers have treated non-locality and uncertainty as two separate phenomena. Now Wehner and Oppenheim have shown that they are intricately linked. What's more, they show that this link is quantitative and have found an equation which shows that the 'amount' of non-locality is determined by the uncertainty principle. 'It's a surprising and perhaps ironic twist,' said Oppenheim, a Royal Society University Research Fellow from the Department of Applied Mathematics & Theoretical Physics at the University of Cambridge. Einstein and his co-workers discovered non-locality while searching for a way to undermine the uncertainty principle. 'Now the uncertainty principle appears to be biting back.' Non-locality determines how well two distant parties can coordinate their actions without sending each other information. Physicists believe that even in quantum mechanics, information cannot travel faster than light. Nevertheless, it turns out that quantum mechanics allows two parties to coordinate much better than would be possible under the laws of classical physics. In fact, their actions can be coordinated in a way that almost seems as if they had been able to talk. Einstein famously referred to this phenomenon as 'spooky action at a distance'.

However, quantum non-locality could be even spookier than it actually is. It's possible to have theories which allow distant parties to coordinate their actions much better than nature allows, while still not allowing information to travel faster than light. Nature could be weirder, and yet it isn't - quantum theory appears to impose an additional limit on the weirdness.

'Quantum theory is pretty weird, but it isn't as weird as it could be. We really have to ask ourselves, why is quantum mechanics this limited? Why doesn't nature allow even stronger non-locality?' Oppenheim says.

'It would be great if we could better coordinate our actions over long distances, as it would enable us to solve many information processing tasks very efficiently,' Wehner says. 'However, physics would be fundamentally different. If we break the uncertainty principle, there is really no telling what our world would look like.'

How did the researchers discover a connection that had gone unnoticed so long? Before entering academia, Wehner worked as a 'computer hacker for hire', and now works in quantum information theory, while Oppenheim is a physicist. Wehner thinks that applying techniques from computer science to the laws of theoretical physics was key to spotting the connection. 'I think one of the crucial ideas is to link the question to a coding problem,' Wehner says. 'Traditional ways of viewing non-locality and uncertainty obscured the close connection between the two concepts.'

Wehner and Oppenheim recast the phenomena of quantum physics in terms that would be familiar to a computer hacker. They treat non-locality as the result of one party, Alice, creating and encoding information and a second party, Bob, retrieving information from the encoding. How well Alice and Bob can encode and retrieve information is determined by uncertainty relations. In some situations, they found that and a third property known as 'steering' enters the picture.

Wehner and Oppenheim compare their discovery to uncovering what determines how easily two players can win a quantum board game: the board has only two squares, on which Alice, can place a counter of two possible colours: green or pink. She is told to place the same colour on both squares, or to place a different colour on each. Bob has to guess the colour that Alice put on square one or two. If his guess is correct, Alice and Bob win the game. Clearly, Alice and Bob could win the game if they could talk to each other: Alice would simply tell Bob what colours are on squares one and two. But Bob and Alice are situated so far apart from each other that light - and thus an information-carrying signal - does not have time to pass between them during the game.

If they can't talk, they won't always win, but by measuring on quantum particles, they can win the game more often than any strategy which doesn't rely on quantum theory. However, the uncertainty principle prevents them from doing any better, and even determines how often they lose the game.

The finding bears on the deep question of what principles underlie quantum physics. Many attempts to understand the underpinnings of quantum mechanics have focused on non-locality. Wehner thinks there may be more to gain from examining the details of the uncertainty principle. 'However, we have barely scratched the surface of understanding uncertainty relations,' she says. The breakthrough is future-proof, the researchers say. Scientists are still searching for a quantum theory of gravity and Wehner and Oppenheim's result concerning non-locality, uncertainty and steering applies to all possible theories - including any future replacement for quantum mechanics.