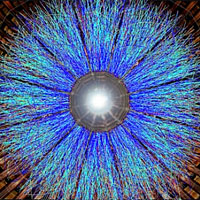 A visualization of one of the first full-energy collisions between gold ions at Brookhaven Lab's Relativistic Heavy Ion Collider, as captured by the Solenoidal Tracker At RHIC (STAR) detector.

For a few millionths of a second after the Big Bang, the universe consisted of a hot soup of elementary particles called quarks and gluons. A few microseconds later, those particles began cooling to form protons and neutrons, the building blocks of matter.

Over the past decade, physicists around the world have been trying to re-create that soup, known as quark-gluon plasma (QGP), by slamming together nuclei of atoms with enough energy to produce trillion-degree temperatures.

“If you’re interested in the properties of the microseconds-old universe, the best way to study it is not by building a telescope, it’s by building an accelerator,” says Krishna Rajagopal, an MIT theoretical physicist who studies QGP.

Quarks and gluons, though they make up protons and neutrons, behave very differently from those heavier particles. Their interactions are governed by a theory known as quantum chromodynamics, developed in part by MIT professors Jerome Friedman and Frank Wilczek, who both won Nobel prizes for their work. However, the actual behavior of quarks and gluons is difficult to study because they are confined within heavier particles. The only place in the universe where QGP exists is inside high-speed accelerators, for the briefest flashes of time.

In 2005, scientists at the Relativistic Heavy Ion Collider at Brookhaven National Laboratory reported creating QGP by smashing gold atoms together at nearly the speed of light. These collisions can produce temperatures up to 4 trillion degrees — 250,000 times warmer than the sun’s interior and hot enough to melt protons and neutrons into quarks and gluons.

The resulting super-hot, super-dense blob of matter, about a trillionth of a centimeter across, could give scientists new insights into the properties of the very early universe. So far, they have already made the surprising discovery that QGP is a nearly frictionless liquid, not the gas that physicists had expected.

By doing higher-energy collisions, scientists now hope to find out more about the properties of quark gluon plasma and whether it becomes gas-like at higher temperatures. They also want to delve further into the very surprising similarities that have been seen between QGP and ultracold gases (near absolute zero) that MIT’s Martin Zwierlein and others have created in the laboratory. Both substances are nearly frictionless, and theoretical physicists suspect that string theory may explain both phenomena, says Rajagopal.

At the Large Hadron Collider in Geneva, MIT faculty Gunther Roland, Wit Busza and Boleslaw Wyslouch are among the physicists planning to double the temperature achieved at Brookhaven, offering a glimpse of an even-earlier stage of the universe’s formation.