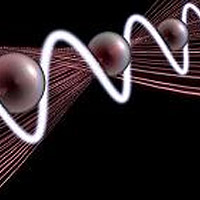 An artist's interpretation of Rydberg atom trapping in an optical lattice.

In an achievement that could help enable fast quantum computers, University of Michigan physicists have built a better Rydberg atom trap. Rydberg atoms are highly excited, nearly-ionized giants that can be thousands of times larger than their ground-state counterparts.

As a result of their size, interactions between Rydberg atoms can be roughly a million times stronger than between regular atoms. This is why they could serve as faster quantum circuits, said Georg Raithel, associate chair and professor in the Department of Physics. Quantum computers could solve problems too complicated for conventional computers. Many scientists believe that the future of computation lies in the quantum realm.

A paper on this research is published in the current edition of Physical Review Letters. The work will be presented at the American Physical Society's Division of Atomic, Molecular and Optical Physics meeting in late May.

'The optical lattice is better than any other Rydberg atom trap for quantum information processing or high-precision spectroscopy,' Raithel said. 'Compared with other traps, optical lattices minimize energy level shifts in the atoms, which is important for these applications.'

Raithel and physics doctoral students Kelly Younge and Sarah Anderson started with ground-state atoms of the soft metal rubidium. At room temperature, the atoms whiz around at the speed of sound, about 300 meters per second. The researchers hit them with lasers to cool and slow them to 10 centimeters per second.

'That's about the speed of a mosquito,' Younge said. 'Cooling lasers combined with a magnetic field allows us to trap the ground-state atoms. Then we excite the atoms into Rydberg states.'

To trap the Rydberg atoms, the researchers took advantage of what's called the 'ponderomotive force' that allows them to secure a whole atom by holding fast to one electron—the sole valence shell particle in the rubidium Rydberg atoms. The optical lattice, formed with intense, interfering laser beams, is what provides the ponderomotive force.

'The laser field holds on to the electron, which behaves almost as if it were free, but the residual weak atomic binding force still holds the atom together. In effect, the entire atom is trapped by the lasers,' Raithel said.

The physicists used a technique called 'microwave spectroscopy,' to determine how the lattice affected the Rydberg atoms, and in general how the atoms behaved in the trap.

'Essentially, we could track the motion of the atoms during the experiment. We could tell if the atoms were sitting in the bottom of a well in the electromagnetic field, or if they were roaming over many wells. In this way, we could optimize the performance of the trap,' Younge said.

The paper is called 'State-dependent Energy Shifts of Rydberg Atoms in a Ponderomotive Optical Lattice.'

This research is funded by the National Science Foundation and the National Defense Science and Engineering Graduate Fellowship Program.