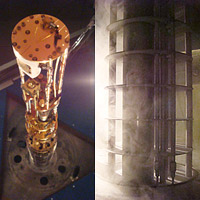 Left: A view from below of the experimental probe, with the vacuum can removed. The STM head can be seen in white at the bottom while the rest of the device is effectively a refrigerator used to push the temperature down close to absolute zero. Right: The sealed probe, which includes the STM head and other refrigeration. It is iced over in the picture because this is just as we have removed it from a bath of Liquid helium (at 4Kelvin). Courtesy: M. Hamidian

By modifying a familiar tool in nanoscience – the Scanning Tunneling Microscope – a team at Cornell University’s Laboratory for Atomic and Solid State Physics have been able to visualize what happens when they change the electronic structure of a “heavy fermion” compound made of uranium, ruthenium and silicon. What they found sheds light on superconductivity – the movement of electrons without resistance –which typically occurs at extremely low temperatures and that researchers hope one day to achieve at something close to room temperature, which would revolutionize electronics.

To make things finding, the researchers modified a scanning microscope that lets you pull or push electrons into a material. With the modification, the microscope could also measure how hard it was to push and pull – a development that Hamidian explains is also significant. “By doing this, we actually learn a lot about the material’s electronic structure. Then by mapping that structure out over a wide area, we can start seeing variations in those electronic states, which come about for quantum-mechanical reasons. Our newest advance, crucial to this paper, was the ability to see at each atom the strength of the interactions that make the electrons ‘heavy.'”

The Cornell experiment and its results are presented this week by the Proceedings of the National Academy of Sciences (See PNAS, available online). The research team included J.C. Séamus Davis, a member of the Kavli Institute at Cornell for Nanoscale Science and developer of the SI-STM technique. Working with synthesized samples created by Graeme Luke from McMaster University (Canada), the experiment was designed by Hamidian, a post-doctoral fellow in Davis’ research group, along with Andrew R. Schmidt, a former student of Davis at Cornell and now a post-doctoral fellow in physics at UC Berkeley. This research was supported by the DOE's Office of Science, the Natural Sciences and Engineering Research Council of Canada, and the Canadian Institute for Advanced Research. Additional collaborators included Ines Firmo of Brookhaven Lab and Cornell, and Andy Schmidt now at the University of California, Berkeley.