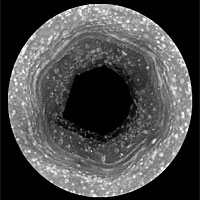 This photo from Cassini, made possible only as Saturn's north pole emerged from winter darkness, shows new details of a jet stream that follows a hexagon-shaped path and has long puzzled scientists.

After waiting years for the sun to illuminate Saturn's north pole again, cameras aboard NASA's Cassini spacecraft have captured the most detailed images yet of the intriguing hexagon shape crowning the planet.

The new images of the hexagon, whose shape is the path of a jet stream flowing around the north pole, reveal concentric circles, curlicues, walls and streamers not seen in previous images. Images and the three-frame animation are available at http://www.nasa.gov/cassini , http://saturn.jpl.nasa.gov and http://ciclops.org .

The last visible-light images of the entire hexagon were captured by NASA's Voyager spacecraft nearly 30 years ago, the last time spring began on Saturn. After the sunlight faded, darkness shrouded the north pole for 15 years. Much to the delight and bafflement of Cassini scientists, the location and shape of the hexagon in the latest images match up with what they saw in the Voyager pictures.

'The longevity of the hexagon makes this something special, given that weather on Earth lasts on the order of weeks,' said Kunio Sayanagi, a Cassini imaging team associate at the California Institute of Technology. 'It's a mystery on par with the strange weather conditions that give rise to the long-lived Great Red Spot of Jupiter.'

The hexagon was originally discovered in images taken by the Voyager spacecraft in the early 1980s. It encircles Saturn at about 77 degrees north latitude and has been estimated to have a diameter wider than two Earths. The jet stream is believed to whip along the hexagon at around 100 meters per second (220 miles per hour).

Early hexagon images from Voyager and ground-based telescopes suffered from poor viewing perspectives. Cassini, which has been orbiting Saturn since 2004, has a better angle for viewing the north pole. But the long darkness of Saturnian winter hid the hexagon from Cassini's visible-light cameras for years. Infrared instruments, however, were able to obtain images by using heat patterns. Those images showed the hexagon is nearly stationary and extends deep into the atmosphere. They also discovered a hotspot and cyclone in the same region.

The visible-light cameras of Cassini's imaging science subsystem, which have higher resolution than the infrared instruments and the Voyager cameras, got their long-awaited glimpse of the hexagon in January, as the planet approached equinox. Imaging team scientists calibrated and stitched together 55 images to create a mosaic and three-frame movie. The mosaics do not show the region directly around the north pole because it had not yet fully emerged from winter night at that time.

Scientists are still trying to figure out what causes the hexagon, where it gets and expels its energy and how it has stayed so organized for so long. They plan to search the new images for clues, taking an especially close look at the newly identified waves that radiate from the corners of the hexagon -- where the jet takes its hardest turns -- and the multi-walled structure that extends to the top of Saturn's cloud layer in each of the hexagon's six sides. Scientists are also particularly intrigued by a large dark spot that appeared in a different position in a previous infrared image from Cassini. In the latest images, the spot appears in the 2 o'clock position.

Because Saturn does not have land masses or oceans on its surface to complicate weather the way Earth does, its conditions should give scientists a more elementary model to study the physics of circulation patterns and atmosphere, said Kevin Baines, an atmospheric scientist at NASA's Jet Propulsion Laboratory, Pasadena, Calif., who has studied the hexagon with Cassini's visual and infrared mapping spectrometer.

The Cassini-Huygens mission is a cooperative project of NASA, the European Space Agency and the Italian Space Agency. JPL, a division of Caltech, manages the Cassini mission for NASA's Science Mission Directorate, Washington. The Cassini orbiter and its two onboard cameras were designed, developed and assembled at JPL. The imaging team is based at the Space Science Institute, Boulder, Colo.