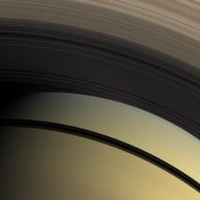 This natural color view from the Cassini spacecraft highlights the myriad gradations in the transparency of Saturn's inner rings.

The dark shadows of the rings separate Saturn's southern hemisphere in the bottom of the image from the north. The innermost D ring is invisible, laid over the planet's northern hemisphere. The translucent C ring runs through the middle of the image. The denser B ring stretches across the top of the image.

This view looks toward the sunlit side of the rings from about 48 degrees below the ringplane. Images taken using red, green and blue spectral filters were combined to create this natural color view. The images were acquired with the Cassini spacecraft wide-angle camera on Feb. 28, 2009 at a distance of approximately 1 million kilometers (620,000 miles) from Saturn. Image scale is 59 kilometers (37 miles) per pixel.

From our vantage point on Earth, Saturn may look like a peaceful orb with rings worthy of a carefully raked Zen garden, but NASA's Cassini spacecraft has been shadowing the gas giant long enough to see that the rings are a rough and tumble roller derby. It has also revealed that the planet itself roils with strange weather and shifting patterns of charged particles. Two review papers to be published in the March 19 issue of the journal Science synthesize Cassini's findings since arriving at Saturn in 2004.

'This rambunctious system gives us a new feel for how an early solar system might have behaved,' said Linda Spilker, a planetary scientist and the new Cassini project scientist at NASA's Jet Propulsion Laboratory in Pasadena, Calif. 'This kind of deep, rich data can only be collected by an orbiting spacecraft, and we look forward to the next seven years around Saturn bringing even more surprises.'

In the paper describing the elegant mess of activity in the rings, lead author Jeff Cuzzi, Cassini's interdisciplinary scientist for rings and dust who is based at NASA Ames Research Center, Moffett Field, Calif., describes how Cassini has shown us that collisions are routine and chunks of ice leave trails of debris in their wakes. Spacecraft data have also revealed how small moons play tug-of-war with ring material and how bits of rubble that would otherwise join together to become moons are ultimately ripped apart by the gravitational pull that Saturn exerts.

During equinox, the period when sunlight hits the rings exactly edge-on, Cassini witnessed rings that are normally flat - about tens of meters (yards) thick - being flipped up as high as the Rocky Mountains.

The spacecraft has also shown that the rings are composed mostly of water ice, with a mysterious reddish contaminant that could be rust or small organic molecules similar to those found in red vegetables on Earth.

'It has been amazing to see the rings come to life before our very eyes, changing even as we watch, being colorful and taking on a tangible, 3-D nature,' Cuzzi said. 'The rings were still a nearly unstructured object in even the best telescopes when I was a grad student, but Cassini has brought us an intimate familiarity with them.'

Cuzzi said Cassini scientists were surprised to find such fine-scale structure nearly everywhere in the rings, forcing them to be very careful about generalizing their findings across the entire ring disk. The discovery that the rings are clumpy has also called into question some of the previous estimates for the mass of the rings because there might be clusters of material hidden inside of the clumps that have not yet been measured.

In the review paper on Saturn's atmosphere, ionosphere and magnetosphere, lead author Tamas Gombosi, Cassini's interdisciplinary scientist for magnetosphere and plasma science who is based at the University of Michigan in Ann Arbor, describes how Cassini helped scientists understand a south polar vortex that has a diameter 20 to 40 times that of a terrestrial hurricane, and the bizarrely stable hexagon-shaped jet stream at the planet's north pole. Cassini scientists have also calculated a variation in Saturn's wind speeds at different altitudes and latitudes that is 10 times greater than the wind speed variation on Earth.

According to Gombosi's paper, Cassini has also shown us that the small moon Enceladus, not the sun or Saturn's largest moon Titan, is the biggest contributor of charged particles to Saturn's magnetic environment. The charged particles from Enceladus, a moon that features a plume of water vapor and other gases spraying from its south polar region, also contribute to the auroras around the poles of the planet.

'We learned from Cassini that the Saturnian magnetosphere is swimming in water,' Gombosi said. 'This is unique in the solar system and makes Saturn's plasma environment particularly fascinating.'

Of course, Cassini's intense investigation has opened up a host of new mysteries. For example, Cassini has shown us images of occasional cannon-ball-like objects that rocket across one of the outer rings known as the F ring, without many clues about where they came from or why they quickly disappear.

Learning more about a kind of radio emission known as 'kilometric radiation' at Saturn has unsettled debates about the planet's rotation rate rather than settled them. While the regular periods of kilometric radiation have given scientists a sense of the rotation rate at Jupiter, Saturn has clocked different periods for the radiation during NASA's Voyager flybys in 1980 and 1981 and the nearly six years of Cassini's investigations. The modulations vary by about 30 seconds to a minute, but they shouldn't be varying at all. The inconsistency may be related to a source in the magnetic bubble around the planet rather than the core of the gas giant, but scientists are still debating.

'Cassini has answered questions we were not even smart enough to ask when the mission was planned and raised a lot of new ones,' Cuzzi said. 'We are hot on the trail, though.'