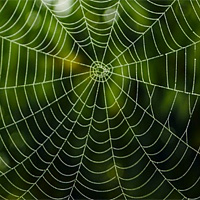 Spiders and silkworms are masters of materials science, but scientists are finally catching up. Silks are among the toughest materials known, stronger and less brittle, pound for pound, than steel. Now scientists at MIT have unraveled some of their deepest secrets in research that could lead the way to the creation of synthetic materials that duplicate, or even exceed, the extraordinary properties of natural silk.

Markus Buehler, the Esther and Harold E. Edgerton Associate Professor in MIT’s Department of Civil and Environmental Engineering, and his team study fundamental properties of materials and how those materials fail. With silk, that means using computer models that help determine the molecular and atomic mechanisms responsible for the material’s remarkable mechanical properties. The models can simulate not just the structures of the molecules but also how they move and interact in relation to each other.

Silk’s combination of strength and ductility — its ability to bend or stretch without breaking — results from an unusual arrangement of atomic bonds that are inherently very weak, Buehler and his team found. Doctoral student Sinan Keten, postdoctoral associate Zhiping Xu and undergraduate student Britni Ihle are co-authors of a paper on the research that was published on March 14 in the journal Nature Materials.

Silks are made from proteins, including some that form thin, planar crystals called beta-sheets. These sheets are connected to each other through hydrogen bonds — among the weakest types of chemical bonds, and a far cry from the much stronger covalent bonds found in most organic molecules. Buehler’s team carried out a series of atomic-level computer simulations that investigated the molecular failure mechanisms in silk. “Small yet rigid crystals showed the ability to quickly re-form their broken bonds, and as a result fail ‘gracefully’ — that is, gradually rather than suddenly,” graduate student Keten explains.

“In most engineered materials” — ceramics, for instance — “high strength comes with brittleness,” Buehler says. “Once ductility is introduced, materials become weak.” But not silk, which has high strength despite being built from inherently weak building blocks. It turns out that’s because these building blocks — the tiny beta-sheet crystals, as well as filaments that join them — are arranged in a structure that resembles a tall stack of pancakes, but with the crystal structures within each pancake alternating in their orientation. This particular geometry of tiny silk nanocrystals allows hydrogen bonds to work cooperatively, reinforcing adjacent chains against external forces, which leads to the outstanding extensibility and strength of spider silk.

One surprising finding from the new work is that there is a critical dependence of the properties of silk on the exact size of these beta-sheet crystals within the fibers. When the crystal size is about three nanometers (billionths of a meter), the material has its ultra-strong and ductile characteristics. But let those crystals grow to five nanometers, and the material becomes weak and brittle.

Buehler says the work has implications far beyond just understanding silk. He notes that the findings could be applied to a broader class of biological materials, such as wood or plant fibers, and bio-inspired materials, such as novel fibers, yarns and fabrics or tissue replacement materials, to produce a variety of useful materials out of simple, commonplace elements. For example, he and his team are looking at the possibility of synthesizing materials that have a similar structure to silk, but using molecules that have inherently greater strength, such as carbon nanotubes.

The long-term impact of this research, Buehler says, will be the development of a new material design paradigm that enables the creation of highly functional materials out of abundant, inexpensive materials. This would be a departure from the current approach, where strong bonds, expensive constituents, and energy intensive processing (at high temperatures) are used to obtain high-performance materials.

This work was supported by the Office of Naval Research, with additional funding from the National Science Foundation, the Army Research Office, the MIT Energy Initiative, and MIT’s UROP and MISTI-Germany programs.

Peter Fratzl, professor in the department of biomaterials in the Max Planck Institute of Colloids and Interfaces in Potsdam, Germany, who was not involved in this work, says that “the strength of this team is their pioneering multi-scale theoretical approach” to analyzing natural materials. He adds that this is “the first evidence from theoretical modeling of how hydrogen bonds, as weak as they might be, can provide high strength and toughness if arranged in a suitable way within the material.”

Professor of biomaterials Thomas Scheibel of the University of Bayreuth, Germany, who was also not involved in this work, says Buehler’s work is of the “highest caliber,” and will stimulate much further research. The MIT team’s approach, he says, “will provide a basis for better understanding of certain biological phenomena so far not understood.”