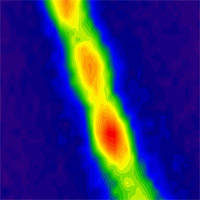 This filament containing about 30 million carbon nanotubes absorbs energy from the sun as photons and then re-emits photons of lower energy, creating the fluorescence seen here. The red regions indicate highest energy intensity, and green and blue are lower intensity.

Solar cells are usually grouped in large arrays, often on rooftops, because each cell can generate only a limited amount of power. However, not every building has enough space for a huge expanse of solar panels.

“Instead of having your whole roof be a photovoltaic cell, you could have little spots that were tiny photovoltaic cells, with antennas that would drive photons into them,” says Michael Strano, the Charles and Hilda Roddey Associate Professor of Chemical Engineering and leader of the research team.

Strano and his students describe their new carbon nanotube antenna, or “solar funnel,” in the Sept. 12 online edition of the journal Nature Materials. Lead authors of the paper are postdoctoral associate Jae-Hee Han and graduate student Geraldine Paulus.

Their new antennas might also be useful for any other application that requires light to be concentrated, such as night-vision goggles or telescopes. The work was funded by a National Science Foundation Career Award, a Sloan Fellowship, the MIT-Dupont Alliance and the Korea Research Foundation.

From light to energy

Solar panels generate electricity by converting photons (packets of light energy) into an electric current. Strano’s nanotube antenna boosts the number of photons that can be captured and transforms the light into energy that can be funneled into a solar cell.

The antenna consists of a fibrous rope about 10 micrometers (millionths of a meter) long and four micrometers thick, containing about 30 million carbon nanotubes. Strano’s team built, for the first time, a fiber made of two layers of nanotubes with different electrical properties — specifically, different bandgaps.

In any material, electrons can exist at different energy levels. When a photon strikes the surface, it excites an electron to a higher energy level, which is specific to the material. The interaction between the energized electron and the hole it leaves behind is called an exciton, and the difference in energy levels between the hole and the electron is known as the bandgap.

Therefore, when light energy strikes the material, all of the excitons flow to the center of the fiber, where they are concentrated. Strano and his team have not yet built a photovoltaic device using the antenna, but they plan to. In such a device, the antenna would concentrate photons before the photovoltaic cell converts them to an electrical current. This could be done by constructing the antenna around a core of semiconducting material.

The interface between the semiconductor and the nanotubes would separate the electron from the hole, with electrons being collected at one electrode touching the inner semiconductor, and holes collected at an electrode touching the nanotubes. This system would then generate electric current. The efficiency of such a solar cell would depend on the materials used for the electrode, according to the researchers.

Strano’s team is the first to construct nanotube fibers in which they can control the properties of different layers, an achievement made possible by recent advances in separating nanotubes with different properties. “It shows how far the field has really come over the last decade,” says Michael Arnold, professor of materials science and engineering at the University of Wisconsin at Madison.

Solar cells that incorporate carbon nanotubes could become a good lower-cost alternative to traditional silicon solar cells, says Arnold. “What needs to be shown next is whether the excitons in the inner shell can be harvested and converted to electrical energy,” he says.

While the cost of carbon nanotubes was once prohibitive, it has been coming down in recent years as chemical companies build up their manufacturing capacity. “At some point in the near future, carbon nanotubes will likely be sold for pennies per pound, as polymers are sold,” says Strano. “With this cost, the addition to a solar cell might be negligible compared to the fabrication and raw material cost of the cell itself, just as coatings and polymer components are small parts of the cost of a photovoltaic cell.”

Strano’s team is now working on ways to minimize the energy lost as excitons flow through the fiber, and on ways to generate more than one exciton per photon. The nanotube bundles described in the Nature Materials paper lose about 13 percent of the energy they absorb, but the team is working on new antennas that would lose only 1 percent.