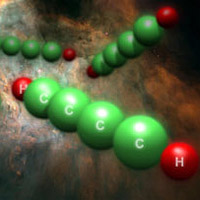 
In interstellar clouds of extremely small density scientists managed to find a molecule that has an unexpectedly complicated structure. The discovery will force a change in the way of thinking about chemical processes occurring in the apparently empty areas of the Galaxy.

Translucent interstellar clouds are penetrated by highly energetic ultraviolet and cosmic radiation which can break any chemical species it meets. However, a group of scientists, the core of which is formed by Polish astrophysicists and astrochemists, managed to observe in such clouds a molecule made up of an unexpectedly large number of atoms: the diacetylene cation. Its discovery in the gas and dust clouds of small density may contribute to solving the oldest unsolved puzzle of spectroscopy. Studies were conducted mostly with the use of an 8-metre telescope in the Paranal Observatory in Chile by a group of scientists from the Nicolaus Copernicus University (NCU) in Torun', Poland, the European Southern Observatory (ESO), the Institute of Physical Chemistry of the Polish Academy of Sciences (IPC PAS, Warsaw), and from the Seoul National University in Korea. The group is headed by Prof. Jacek Kre?owski from the NCU’s Astronomical Centre.

The density of translucent interstellar clouds is extremely small. 'The dilution of matter in such clouds corresponds to the density obtained as a result of distributing one glass of air in an empty cube the face of which equals the area of a small country. This is much less than the best vacuum produced in a lab,' explains one of the co-finders, Assoc. Prof. Robert Ko?os from the Laboratory Astrochemistry Group of the Institute of Physical Chemistry of the PAS. However, since interstellar clouds are of huge sizes, reaching dozens of light years, their gas molecules have a chance to interact with the penetrating radiation. Spectroscopy is the field of science that deals with radiation-matter interactions.

Molecules absorb and emit photons of specific energies only (and thus of specific wavelengths) corresponding to differences between energy levels typical for a given species. Consequently, as a result of interactions with diluted gases in translucent clouds, common in our and other galaxies, starlight that reaches the Earth is slightly changed. It lacks the waves of certain length – those absorbed by intervening interstellar atoms and molecules.

In the 1920s astrophysicists observed that light was absorbed by the interstellar medium in a manner that could not be explained by the presence of very simple components of interstellar gas known at that time. Today, with the use of radio waves, it is possible to detect quite big molecules – the record holder is cyanopolyyne HC11N which comprises 13 atoms – but these are created inside dense, non-transparent clouds where they are protected from disruptive radiation.

'The peculiar optical properties of translucent clouds, connected with the presence of the so-called Diffuse Interstellar Bands DIB, have been a mystery for nearly 90 years. They are even called the longest standing unsolved problem of all spectroscopy,' says Prof. Kre?owski, an authority in the field of optical spectroscopy of interstellar medium. The recent discovery allowed a new band to be added to the DIB set and, at the same time, to be identified as originating from the diacetylene cation H-CC-CC-H+. 'Diacetylene is a species unexpectedly big for translucent clouds. So far the compounds of no more than three atoms have been found there: carbon C3 and hydrogen H3+. In order to explain the presence of diacetylene cation we will have to revisit the existing astrochemical models,' adds Assoc. Prof. Ko?os.

Asymmetric molecules – such as the cyanopolyyne mentioned above, a linear sequence of carbon atoms with hydrogen at one end and nitrogen at the other – are able to emit or absorb the electromagnetic waves in the radiofrequency range. The high symmetry of diacetylene cation makes it invisible to radio telescopes, but present optical observations suggest this species to be quite a common component of the interstellar medium. It is detected not only in the two Galaxy regions that are especially rich in carbon, but also in averaged data coming from a dozen other lines of sight.

Following the detection of diacetylene cation it may be supposed that there are more diffuse interstellar bands generated by similar, symmetric molecules. 'It seems probable that the DIB puzzle will soon be largely solved,' sums up Prof. Kre?owski.

The Institute of Physical Chemistry of the Polish Academy of Sciences (http://www.ichf.edu.pl/) was established in 1955 as one of the first chemical institutes of the PAS. The Institute's scientific profile is strongly related to the newest global trends in the development of physical chemistry and chemical physics. Scientific research is conducted in nine scientific departments. CHEMIPAN R&D Laboratories operating as part of the Institute implement, produce and commercialise specialist chemical compounds to be used, in particular, in agriculture and pharmacy. The Institute publishes approximately 300 original research papers annually.