Spacetime: A Smoother Brew Than We Knew 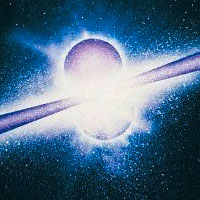 Or so an intergalactic photo finish would suggest.

Physicist Robert Nemiroff of Michigan Technological University reached this heady conclusion after studying the tracings of three photons of differing wavelengths that had been recorded by NASA’s Fermi Gamma-ray Space Telescope in May 2009.

The photons originated about 7 billion light years away from Earth in one of three pulses from a gamma-ray burst and arrived at the orbiting telescope just one millisecond apart, in a virtual tie.

Gamma-ray bursts are short-lived bursts of gamma-ray photons, the most energetic form of light. They can originate far across the universe, and astronomers believe many are caused by giant stars collapsing, often billions of years before the Earth was formed.

“Gamma-ray bursts can tell us some very interesting things about the universe,” Nemiroff said. In this case, those three photons recorded by the Fermi telescope suggest that spacetime may not be not as bubbly as some scientists think.

Some theories of quantum gravity say that the universe is not smooth but foamy—made of fundamental units called Planck lengths that are less than a trillionth of a trillionth the diameter of a hydrogen atom. Planck lengths are so small that there’s no way to detect them, except via photons like those that make up gamma-ray bursts.

Here’s why. The wavelengths of these photons are some of the shortest distances known to science—so short they should interact with the even smaller Planck length. And if they interact, the photons should be dispersed—scattered—on their trek through Planck length–pixelated spacetime.

In particular, they should disperse in different ways if their wavelengths differ, just as a ping pong ball and a softball might take alternate paths down a gravely hillside.

You wouldn’t notice the scattering over short distances, but across billions of light years, the Planck lengths should disperse the light. And three photons from the same gamma-ray burst should not have crashed through the Fermi telescope at the same moment.

But they did, and that calls into question just how foamy spacetime really is. “We have shown that the universe is smooth across the Planck mass,” Nemiroff said. “That means that there’s no choppiness that’s detectable. It’s a really cool discovery. We’re very excited.”

A story on their work, “Cosmic Race Ends in a Tie,” appeared in the news section of the journal Nature on January 10.