Putting a Spin on Light and Atoms 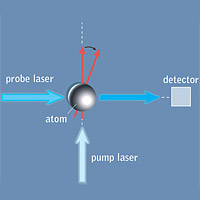 In a vapor-cell magnetometer, the spin of a population of atoms is first polarized, as indicated by the vertical red arrow, by a pump laser that is itself circularly polarized. When a magnetic field is applied, the spin vector is rotated, as indicated by the tilted red arrow. (The magnetic field is perpendicular to the plane of this diagram.) The probe laser’s own plane polarization is rotated by the atom’s spin, and the degree of rotation is measured at the detector.

Magnetometers come in many shapes and sizes – an ordinary hand-held compass is the simplest – but alkali-vapor magnetometers are extrasensitive devices that measure magnetic fields using light and atoms. They can detect archaeological remains and mineral deposits underground by their faint magnetic signatures, among a host of other scientific applications.

Researchers from the U.S. Department of Energy’s Lawrence Berkeley National Laboratory, the University of California at Berkeley, and the Vavilov State Optical Institute in St. Petersburg, Russia, have now made sensitive measurements of magnetic fields by maintaining the spin polarization of atoms in an alkali-vapor magnetometer for more than 60 seconds at room temperature – a two-orders-of-magnitude improvement in this important measurement parameter over the best previous performance.

In a spin-polarized population of atoms, more than half the atoms are oriented in the same direction. An alkali-vapor magnetometer polarizes a vapor of alkali-metal atoms, for example potassium, rubidium, or cesium, inside a glass cell using a circularly-polarized “pump” laser beam.

Because the spinning atoms have a magnetic moment (with north and south magnetic poles, like a bar magnet), an outside magnetic field will tilt the axis of spin and cause it to precess like a spinning top that’s been pushed off the vertical. Changes in the outside field’s strength or direction can be detected using a probe laser to repeatedly measure the vapor’s average spin orientation.

“The fundamental sensitivity of the measurement depends on a number of variables,” says Dmitry Budker of Berkeley Lab’s Nuclear Science Division, a professor of physics at UC Berkeley. “These include the number of atoms in the sample and, most important, the spin relaxation time of the polarized atoms.”

Spin relaxation is the loss of polarization, the return of the population of atoms to random orientations, which happens faster as atoms collide with other atoms, or if the external magnetic field varies.

How to keep ‘em spinning

“When an alkali-metal atom bounces off a glass wall, it tends to stick for a little while,” says Budker. “During its stay it is subject to fluctuating magnetic fields, which cause it to lose polarization. So one way to maintain polarization is to keep the atoms away from the wall, or to make their sojourns on the wall shorter.”

One approach is to fill the cell with an inert buffer gas like helium or neon, at a density high enough that the alkali atoms constantly bump into the buffer gas atoms instead of colliding with the walls. The resulting slow diffusion keeps many of the polarized atoms away from the wall for a long time. Nevertheless, collisions with the buffer gas atoms eventually relax the polarization of the metal atoms.

A better way to keep spin coherence high is to coat the interior of the glass vapor cell with an “antirelaxation” coating. The goal is to increase the number of bounces an atom can survive before losing its polarization.

“It’s important to reduce magnetic fluctuations by avoiding any heavy atoms in the coating,” Budker says. Compounds of light carbon and hydrogen atoms are the choice; state-of-the-art antirelaxation coatings are paraffins, known chemically as alkanes. A polarized atom can hit a paraffin coating 10,000 times before losing its polarization.

But Budker and his long-time colleague Mikhail Balabas of St. Petersburg’s Vavilov State Optical Institute have worked to extend relaxation times using different coatings. Contrary to conventional wisdom, Balabas suggested substituting a different kind of hydrocarbon known as an alkene, or olefin. Alkenes are similar to alkanes but, instead of being saturated (all single bonds), have one carbon double bond in the molecule. The researchers’ experiments with rubidium vapor cells subsequently showed that a polarized rubidium atom could bounce off an alkene coating a million times before losing its polarization.

“The coating material is not all there is to prolonging polarization, however,” Budker says. “One way polarization is lost is when polarized rubidium atoms in the cell get in contact with uncoated surfaces in the cell’s rubidium reservoir – the sidearm that contains a droplet of the solid metal.”

Balabas devised a simple lock – a sliding glass plug that, merely by rotating the cell assembly, opens or closes the stem between the reservoir and the interaction region where the atoms are polarized and measured.

Finally, the researchers slowed spin relaxation due to collisions among the rubidium atoms inside the interaction area of the cell by modifying a technique called SERF (for “spin exchange, relaxation-free”). The physics of SERF were developed by William Happer and applied to magnetometry by Michael Romalis, both of Princeton University. SERF normally uses buffer gas to reduce the number of alkali atoms hitting the cell wall, while at the same time paradoxically stepping up collisions among the alkali atoms themselves, heating the cell to some 150 degrees Celsius and increasing the density of the atomic vapor.

SERF works only for very weak magnetic fields, where precession is slow. Since atoms collide many times during any period of precession, the multiple collisions frequently exchange spin states among the atoms and keep the average polarization high. To extend the relaxation time still further, the Berkeley and Vavilov Institute collaboration used their “super” antirelaxation coating instead of the usual buffer gas.

The experimental assembly was gimbaled so the vapor cell could be rotated, letting the sliding plug lock the neck of the flask or unlock it to allow rubidium vapor into the reaction region. Then a circularly polarized pump beam traversed the axis of the experiment to polarize the atomic vapor, while a probe beam passing through the cell from side to side recorded the spin state of the rubidium vapor by measuring how the probe beam’s own linear polarization was rotated.

Three cells were tested, which differed either in construction or in the rubidium isotopes they contained. Relaxation times in two of the cells were about 15 seconds, already a significant extension, but in one, using the most common isotope of rubidium, 85Rb, the relaxation time stretched to over a minute. In contrast to the usual SERF setup, this very long relaxation time was achieved at room temperature instead of extreme heat.

“We have demonstrated two orders of magnitude improvement over the best paraffin coatings, and at room temperature – but at a relatively low magnetic field,” Budker says. “The next challenge is to use this technique in stronger magnetic fields – as strong as Earth’s magnetic field, for example, where many of the practical applications are.”

At the same time, Budker and his colleagues intend to explore the application of their new coatings, and the other tricks they used to achieve long relaxation times, to devices other than magnetometers. Among the candidates are atomic clocks, quantum memory devices, and other scientific gadgets that likewise depend on long-lived spin polarization of atoms.