Spring Has Sprung ... On Titan 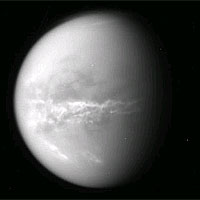 NASA's Cassini spacecraft obtained this raw image of Saturn's moon Titan on Oct. 18, 2010. Bright clouds streak the moon's midsection, likely an indication of changing seasons and the arrival of spring in the northern hemisphere. Cassini's imaging camera was about 2.5 million kilometers (1.5 million miles) away from Titan. The rings of Saturn faintly etch the left side of this image. The image has not been validated or calibrated.

NASA's Cassini spacecraft has sent back dreamy raw images of Saturn's moon Titan that show the appearance of clouds around the moon's midsection. These bright clouds likely appeared because the moon is changing seasons and spring has arrived in Titan's northern hemisphere. The images were taken from about 2.5 million kilometers (1.5 million miles) away from Titan on Oct. 18, 2010, and also show the faint etchings of Saturn's rings. One of the new raw images also features a cameo from the icy moon Tethys, which looks smaller and brighter than Titan in the image.

The Cassini-Huygens mission is a cooperative project of NASA, the European Space Agency and the Italian Space Agency. The Jet Propulsion Laboratory manages the project for NASA's Science Mission Directorate in Washington. The Cassini orbiter was designed, developed and assembled at JPL. The imaging operations center is based at the Space Science Institute in Boulder, Colo.