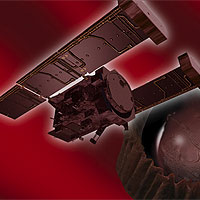 Here are five facts you should know about NASA's Stardust-NExT spacecraft as it prepares for a Valentine's 'date' with comet Tempel 1. Feel free to sing along!

1. 'The Way You Look Tonight' - The spacecraft is on a course to fly by comet Tempel 1 on Feb. 14 at about 8:37 p.m. PST (11:37 p.m. EST) -- Valentine's Day. Time of closest approach to Tempel 1 is significant because of the comet's rotation. We won't know until images are returned which face the comet has shown to the camera.

2. 'It's All Coming Back To Me Now' - In 2004, Stardust became the first mission to collect particles directly from a comet, Wild 2, as well as samples of interstellar dust. The samples were returned in 2006 via a capsule that detached from the spacecraft and parachuted to the ground at a targeted area in Utah. Mission controllers then placed the still-viable Stardust spacecraft on a flight path that could reuse the flight system, if a target of opportunity presented itself. Tempel 1 became that target of opportunity.

3. 'The First Time Ever I Saw Your Face' - The Stardust-NExT mission will allow scientists for the first time to look for changes on a comet's surface that occurred after one orbit around the sun. Tempel 1 was observed in 2005 by NASA's Deep Impact mission, which put an impactor on a collision course with the comet. Stardust-NExT might get a glimpse of the crater left behind, but if not, the comet would provide scientists with previously unseen areas for study. In addition, the Stardust-NExT encounter might reveal changes to Tempel 1 between Deep Impact and Stardust-Next, since the comet has completed an orbit around the sun.

4. 'The Wind Beneath My Wings' - This Tempel 1 flyby will write the final chapter of the spacecraft's success story. The aging spacecraft approached 12 years of space travel on Feb. 7, logging almost 6 billion kilometers (3.5 billion miles) since launch. The spacecraft is nearly out of fuel. The Tempel 1 flyby and return of images are expected to consume the remaining fuel.

5. 'Love is Now the Stardust of Yesterday' - Although the spacecraft itself will no longer be active after the flyby, the data collected by the Stardust-NExT mission will provide comet scientists with years of data to study how comets formed and evolved.

Bonus points for naming all the artists who sing these catchy tunes.