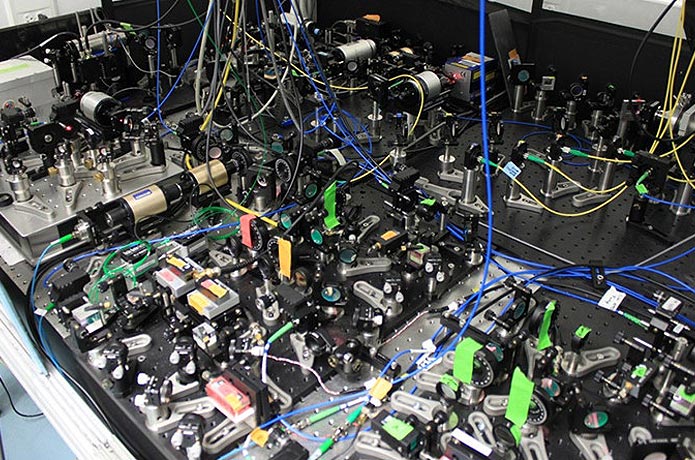 A new study suggests that many theorized heavy particles, if they exist at all, do not have the properties needed to explain the predominance of matter over antimatter in the universe.

If confirmed, the findings would force significant revisions to several prominent theories posed as alternatives to the Standard Model of particle physics, which was developed in the early 1970s. Researchers from Yale, Harvard, and Northwestern University conducted the study, which was published Oct. 17 in the journal Nature.

The discovery is a window into the mind-bending nature of particles, energy, and forces at infinitesimal scales, specifically in the quantum realm, where even a perfect vacuum is not truly empty. Whether that emptiness is located between stars or between molecules, numerous experiments have shown that any vacuum is filled with every type of subatomic particle — and their antimatter counterparts — constantly popping in and out of existence.

One approach to identifying them is to take a closer look at the shape of electrons, which are surrounded by subatomic particles. Researchers examine tiny distortions in the vacuum around electrons as a way to characterize the particles.

The new study reports work done with the Advanced Cold Molecule Electron Dipole Moment (ACME) experiment, a collaborative effort to detect the electric dipole moment (EDM) of the electron. An electron EDM corresponds to a small bulge on one end of the electron, and a dent on the opposite end.

The Standard Model predicts an extremely small electron EDM, but there are a number of cosmological questions — such as the preponderance of matter over antimatter in the aftermath of the Big Bang — that have pointed scientists in the direction of heavier particles, outside the parameters of the Standard Model, that would be associated with a much larger electron EDM.

“The Standard Model makes predictions that differ radically from its alternatives and ACME can distinguish those,” said David DeMille, who leads the ACME group at Yale. “Our result tells the scientific community that we need to seriously rethink those alternative theories.”

Indeed, the Standard Model predicts that particles surrounding an electron will squash its charge ever so slightly, but this effect would only be noticeable at a resolution 1 billion times more precise than ACME observed. However, in models predicting new types of particles — such as supersymmetry and grand unified theories — a deformation in the shape at ACME’s level of precision was broadly expected.

“An electron always carries with it a cloud of fleeting particles, distortions in the vacuum around it,” said John Gillaspy, program director for atomic, molecular, and optical physics for the National Science Foundation (NSF), which has funded the ACME research for nearly a decade. “The distortions cannot be separated from the particle itself, and their interactions lead to the ultimate shape of the electron’s charge.”

ACME uses a unique process that involves firing a beam of cold thorium-oxide (ThO) molecules — a million of them per pulse, 50 times per second — into a chamber the size of a large desk.

Within that chamber, lasers orient the molecules and the electrons within, as they soar between two charged glass plates inside a carefully controlled magnetic field. ACME researchers watch for the light the molecules emit when targeted by a carefully tuned set of readout lasers. The light provides information to determine the shape of the electron’s charge.

By controlling some three dozen parameters, from the tuning of the lasers to the timing of experimental steps, ACME achieved a 10-fold detection improvement over the previous record holder: ACME’s 2014 experiment. The ACME researchers said they expect to reach another 10-fold improvement on precision in future versions of the experiment.

Along with DeMille, ACME’s principle investigators are Gerald Gabrielse from Northwestern and John Doyle from Harvard. Co-authors of the study include Zack Lasner, Brendon O’Leary, and Xing Wu of Yale, and former Yale researcher Adam D. West.