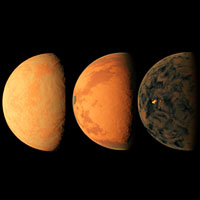 Artist conceptualizations offer a graphic representation of radial velocity data that helped to identify the three newest Super-Earths around Gliese 667C. Super-Earths are planets more massive than Earth, but less massive than planets like Uranus or Neptune, and are within their stars habitable zone--not too hot and not too cold--a thin shell around a star in which water may be present in liquid form if conditions are right. This is the first time that three such planets have been spotted orbiting in this zone in the same system.

New observations of a star known as Gliese 667C have revealed a system with at least six planets, including a record-breaking three super-Earths orbiting in the star's 'habitable zone' where liquid water could exist on the planets. This is the first planetary system found to have a fully packed habitable zone.

'The three planets in the habitable zone are roughly Earth-sized, and only about three to four times the mass of the Earth,' said Steven Vogt, University of California, Santa Cruz astronomy and astrophysics professor who is on a team with Paul Butler of the Carnegie Institution of Washington's Department of Terrestrial Magnetism that made this discovery.

The same team announced last year they had already found one planet in the habitable zone of this star system. They suspected the presence of more planets but couldn't confirm them given the data set available then. This new result confirms the presence of two previously known planets orbiting this star, but also reveals five more. The National Science Foundation (NSF) funds both Vogt and Butler's research.

'Finding multiple Super-earths orbiting in the habitable zone of such a nearby star is quite significant,' Vogt said. 'It really confirms our suspicion that our galaxy is teeming with potentially habitable rocky planets. Many of these, such as the ones around GJ 667C, are even near enough to imagine sending robotic interstellar probes out to study within a few human lifetimes.'

Also funded by NSF, coauthor Rory Barnes at the University of Washington noted the discovery offers additional insights. 'The number of potentially habitable planets in our galaxy is much greater if we can expect to find several of them around each low-mass star. Instead of looking at 10 stars to look for a single potentially habitable planet, we now know we can look at just one star and have a high chance of finding several of them,' he said

Gliese 667C is a well-studied star. Just over one-third the mass of the Sun, it is part of a triple-star system known as Gliese 667 (also referred to as GJ 667), 22 light-years away in the constellation Scorpius (the Scorpion). This is relatively close to Earth, within the Sun's galactic neighborhood, and much closer than the star systems investigated using telescopes such as the planet-hunting Kepler space telescope.

'This discovery is really the start of a whole new era studying Earth-like planets that may have liquid water on the surface,' said Maria Womack, NSF program officer. 'This is a result of more than a decade of hard work using the best tools to do cutting-edge science--just the kind of research NSF loves to be part of.'

The team of astronomers--led by Guillem Anglada-Escudé of the University of Göttingen, Germany, and Mikko Tuomi of the University of Hertfordshire, U.K.--combined new observations from Keck and other telescopes with extensive data collected previously by the High Accuracy Radial velocity Planet Searcher at the European Southern Observatory's 3.6-meter telescope in Chile. The findings will be published this week in the journal Astronomy and Astrophysics.