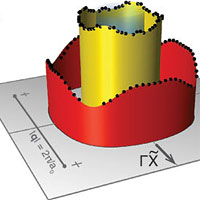 A three-dimensional graph of three energy bands where evidence of superconducting Cooper pairs of electrons were found in an iron atom. The height of the cylinder shows the energy binding each of those electrons into a Cooper pair, which is different for each band and varies with the direction of travel. Black dots are data points, which were omitted from the inner band for simplicity.

Research at Cornell has for the first time confirmed key theoretical predictions about how iron-based high-temperature superconductors behave.

J.C. Séamus Davis, the James Gilbert White Distinguished Professor in the Physical Sciences at Cornell and director of the Center for Emergent Superconductivity at Brookhaven National Laboratory, and colleagues report in the May 4 online edition of the journal Science that they have identified gaps in the energy levels of electrons in an iron-based superconductor that were predicted by leading theories in this new field. The gaps represent electrons that have paired up with twins from adjacent atoms to form so-called 'Cooper pairs' that move through the conductor without interference. The research also confirms a prediction that the energy binding the Cooper pairs varies with the direction they take when leaving an atom.

Studying crystals of a compound of lithium, iron and arsenic, LiFeAs for short, that becomes a superconductor at 15K (Kelvins, or Celsius degrees above absolute zero), the Cornell researchers found three of the five possible electron bands.

'There are two more pairing gaps that we should have been able to detect, and we don't know yet why not,' Davis said. But finding these three along with the directionality is enough to strongly support the theory, he said, and the measurements give the theorists numbers to plug in to refine and extend their predictions.

The secret lies in 'spin.' Just as current rotating in a coil of wire generates a magnetic field, a spinning electron is thought to generate a tiny field, which physicists refer to as spin. Spin can be up or down -- north pole at the top or bottom. It's believed that Cooper pairs form when two electrons with opposite spins join up, analogous to two bar magnets snapping together with their north and south poles meeting. The pair is magnetically neutral, so it can move without being impeded by the magnetic fields of other particles.

Theorists propose that in iron-based superconductors, electrons pair up only with electrons in adjacent atoms that are at the same energy level, referring to how strongly the electron is bonded to the atom. It's as if the tall men at a party could only dance with the tall women, short men with short women, and so on. If that's true, different pairing energy gaps should appear in association with each of the five active electronic energy levels in an iron atom.

Milan P. Allan and Andreas W. Rost, postdoctoral researchers in the Davis group, used a scanning tunneling microscope (STM) with a probe so sharp that its tip is a single atom, scanning across a surface in steps smaller than atomic diameters. When the probe is given a positive charge, it pulls electrons out of the surface, creating a tiny electric current. By varying the charge, they can measure the energy levels of electrons under the probe, in effect measuring how much energy it takes to pull an electron loose from its atom or, in this case, how much energy it takes to pull a Cooper pair apart.

The researchers scanned 95-nanometer-square sections of the LiFeAs surface, obtaining both a real-space image showing the locations of atoms, and readings of electron energies. The extreme precision of the STM allowed them to find not only evidence of Cooper pairing, but also signals that appeared when electrons released by breaking Cooper pairs bounced off nearby atoms, from which they could determine the direction from which the pairs left the iron atoms.

The work was supported primarily by the U.S. Department of Energy, the Cornell Center for Materials Research, funded by the National Science Foundation, the UK Engineering and Physical Sciences Research Council, and the Japan Society for the Promotion of Science.