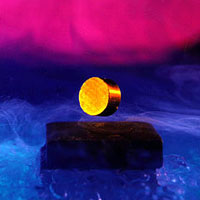 MIT physicists have discovered that several high-temperature superconductors display patchwork quilt-like variations at the atomic scale, a surprising finding that could help scientists understand a new class of unconventional materials.

The researchers said the variation in a property known as the Fermi surface, which has never been seen before in any kind of material, could just be an oddity. But it could also serve as an important clue for physicists working to unravel the mystery of why a broad new class of materials exhibits exotic properties from high-temperature superconductivity (the ability to carry electricity with no resistance) to colossal magneto-resistance (the ability to dramatically change electrical resistance when a magnetic field is applied).

In such materials, known as strongly correlated electronic materials, interactions between electrons, normally weak enough that they can essentially be ignored, dominate the physics of the material, leading to a host of unexplained phenomena.

'These materials are so unusual that we decided to check for variations that would normally be impossible -- and there they were,' said Eric Hudson, associate professor of physics and senior author of a paper on the work that appeared online in Nature Physics Jan. 25.

Hudson and colleagues found that the Fermi surface, a measurement of the distribution of electrons in a material, varies at the atomic scale across the surface of two bismuth-based superconductors, which belong to the class of strongly correlated electronic materials. Until now, it was believed that Fermi surface was uniform throughout any material.

'The idea that electrons separated by just an atom's distance can behave so differently is astonishing,' Hudson said.

The discovery that electronic properties can vary so much on the nanoscale could shed light on how this class of materials deals with strongly interacting electrons, and how their unusual properties arise, he said.

To study the Fermi surface, the researchers used a common technique called scanning tunneling microscopy, which, combined with a new analysis method called quasiparticle interference, can reveal, on an atom-by-atom basis, what electrons are doing.

This research was funded by the Research Corporation, the Materials Research Science and Engineering Center, National Science Foundation and Department of Energy.