Supernova Caught in the Act 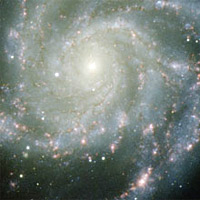 This close up image of the nearby galaxy M101 was obtained with the Mayall 4-meter telescope at Kitt Peak National Observatory. M101 is a spiral galaxy in the constellation Ursa Major and is quite similar to our own galaxy, the Milky Way. It is about 20 million light years (6.4 Mpc) away. The supernova is clearly visible as the bright, bluish star in the upper, right portion of the image. It is the closest Type Ia supernova to be observed since 1972. This image was obtained on September 18th, 2011, about two weeks after the supernova achieved its peak brightness.

The earliest detection ever of a Type Ia supernova has led to unparalleled observations of the initial stages of the stellar explosion and characterization of the nature of the stars that formed it.

On Aug. 24, 2011, astronomers discovered a nearby Type Ia supernova--the earliest detection ever--with help from a machine-based, real-time, classification system. The early detection and close proximity of the stars set the stage for unprecedented observation of the initial stages of a Type Ia supernova. The December 15 issue of the journal Nature published two articles describing the exploding star and details about the companion star.

'The National Science Foundation- (NSF) sponsored work we did in Berkeley on real-time classification of astronomical time-series helped with this large needle-in-a-haystack problem: we have 1.5 million candidates a night, of which only a few are interesting new transients,' said Josh Bloom, a co-author on both articles referring to objects that change in the night sky. 'Our machine learning-based codes raised the supernova candidate event to the top of list of possible new transients.'

Supernovae are extraordinarily bright stellar explosions that signal the death of a star and there are several different types. Type Ia supernovae have similarities that allow astronomers to use them as standards when comparing the distances of objects in the sky, however little is known about the stars that produce them or how they behave when they explode. Models of Type Ia supernovae assume they are formed from two-star systems in which a very dense, very small star called a white dwarf orbits a companion.

This supernova, named 2011fe, occurred in the Pinwheel galaxy, which is located in the 'Big Dipper' within the Ursa Major constellation. Early detection gave astronomers the extraordinary opportunity to observe the evolution of the brightness and spectra of the energy emitted from the explosion over time. Based on these data, researchers were able to approximate how big the star was and when it exploded, in addition to details about the companion star in the system.

NSF's Cyber-Enabled Discovery and Innovation (CDI) program, with the goal of building computational tools with concrete scientific returns in mind, supported the computational framework that enabled this discovery.

The framework could form the foundation for applications in other fields with similar demands and constraints, such as high-frequency financial data, robotics, medical signal monitoring, geophysics, weather and particle physics.

The astronomy, computer science and mathematical sciences divisions of NSF jointly supported the CDI grant. 'The unprecedented rapid detection and early observation of a supernova is a wonderful example of a main theme of the interdisciplinary CDI program--'From Data to Knowledge: enhancing human cognition and generating new knowledge from a wealth of digital data,' said Tom Russell of NSF's Office of Integrative Activities. 'In 2012, NSF is continuing its emphasis on this theme through the Data-Enabled Science component of the Cyberinfrastructure Framework for 21st Century Science and Engineering portfolio of activities.'

'This event might have been missed or not detected right away--maybe even a week later, if we only relied on human eyes to do the search,' continued Bloom. 'No one has done this type of search on this scale before, and as new astronomical surveys come online in the next few years, this framework for extracting novel science from large amounts of data will become increasingly important.'

Methods developed within the ‘Data to Knowledge' theme of the CDI program apply scientific knowledge to enable automated processing of massive data streams, while the Palomar Transient Factory (PTF) is a wide-field survey that scans the skies for transients. This made Bloom's CDI project and the PTF a natural collaboration.

'We are moving into the era of peta-scale astronomical surveys, of which the NSF-supported Palomar Transient Factory is an early example,' said Nigel Sharp, program director for NSF's division of Astronomical Sciences. 'This supernova result is an excellent illustration of the power of machine learning to assist not only with data collection and reduction, but with the tasks of discovery and inference as well.'

Shri Kulkarni, an astronomer at University of California, Berkeley and leader of the PTF, also commented on the effectiveness of this collaboration and the power of teamwork, 'The Palomar Transient Factory has been an amazing machine. The rapid discovery of the supernova in the Pinwheel galaxy is a testament to the great teamwork (spread over a half a dozen institutions) that has made rapid classification of supernova possible within the same night.'