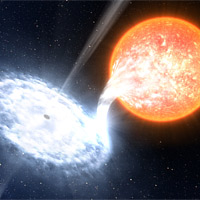 GX 339-4, illustrated here, is among the most dynamic binaries in the sky, with four major outbursts in the past seven years. In the system, an evolved star no more massive than the sun orbits a black hole estimated at 10 solar masses.

Studies of one of the galaxy's most active black-hole binaries reveal a dramatic change that will help scientists better understand how these systems expel fast-moving particle jets.

Binary systems where a normal star is paired with a black hole often produce large swings in X-ray emission and blast jets of gas at speeds exceeding one-third that of light. What fuels this activity is gas pulled from the normal star, which spirals toward the black hole and piles up in a dense accretion disk.

'When a lot of gas is flowing, the dense disk reaches nearly to the black hole,' said John Tomsick at the University of California, Berkeley. 'But when the flow is reduced, theory predicts that gas close to the black hole heats up, resulting in evaporation of the innermost part of the disk.' Never before have astronomers shown an unambiguous signature of this transformation.

To look for this effect, Tomsick and an international group of astronomers targeted GX 339-4, a low-mass X-ray binary located about 26,000 light-years away in the constellation Ara. There, every 1.7 days, an evolved star no more massive than the sun orbits a black hole estimated at 10 solar masses. With four major outbursts in the past seven years, GX 339-4 is among the most dynamic binaries in the sky.

In September 2008, nineteen months after the system's most recent outburst, the team observed GX 339-4 using the orbiting Suzaku X-ray observatory, which is operated jointly by the Japan Aerospace Exploration Agency and NASA. At the same time, the team also observed the system with NASA's Rossi X-ray Timing Explorer satellite.

Instruments on both satellites indicated that the system was faint but in an active state, when black holes are known to produce steady jets. Radio data from the Australia Telescope Compact Array confirmed that GX 339-4's jets were indeed powered up when the satellites observed.

Despite the system's faintness, Suzaku was able to measure a critical X-ray spectral line produced by the fluorescence of iron atoms. 'Suzaku's sensitivity to iron emission lines and its ability to measure the shapes of those lines let us see a change in the accretion disk that only happens at low luminosities,' said team member Kazutaka Yamaoka at Japan's Aoyama Gakuin University.

X-ray photons emitted from disk regions closest to the black hole naturally experience stronger gravitational effects. The X-rays lose energy and produce a characteristic signal. At its brightest, GX 339-4's X-rays can be traced to within about 20 miles of the black hole. But the Suzaku observations indicate that, at low brightness, the inner edge of the accretion disk retreats as much as 600 miles.

'We see emission only from the densest gas, where lots of iron atoms are producing X-rays, but that emission stops close to the black hole -- the dense disk is gone,' explained Philip Kaaret at the University of Iowa. 'What's really happening is that, at low accretion rates, the dense inner disk thins into a tenuous but even hotter gas, rather like water turning to steam.'

The dense inner disk has a temperature of about 20 million degrees Fahrenheit, but the thin evaporated disk may be more than a thousand times hotter.

The study, which appears in the Dec. 10 issue of The Astrophysical Journal Letters, confirms the presence of low-density accretion flow in these systems. It also shows that GX 339-4 can produce jets even when the densest part of the disk is far from the black hole.