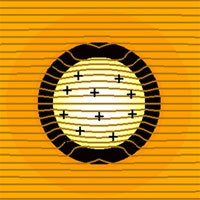 This diagram shows one of the core-shell nanoparticles embedded in a host material, as described in a paper in Advanced Materials. The motion of electrons, as shown by brown lines, is bent in such a way that they appear to be unaffected by the presence of the particle, thus allowing them to pass with little resistance.

Thermoelectric devices — which can either generate an electric current from a difference in temperature or use electricity to produce heating or cooling without moving parts — have been explored in the laboratory since the 19th century. In recent years, their efficiency has improved enough to enable limited commercial use, such as in cooling systems built into the seats of automobiles. But more widespread use, such as to harness waste heat from power plants and engines, calls for better materials.

Now, a new way of enhancing the efficiency of such devices, developed by researchers at MIT and Rutgers University, could lead to such wider applications. The new work, by mechanical engineering professor Gang Chen, Institute Professor Mildred Dresselhaus, graduate student Bolin Liao, and recent postdoc Mona Zebarjadi and research scientist Keivan Esfarjani (both of whom are now on the faculty at Rutgers), has been published in the journal Advanced Materials.

The group’s finding that nanoscale materials could have properties significantly different from those of larger chunks of the same material — work that involved tiny particles of one material embedded in another, forming nanocomposites — ultimately helped improve thermoelectric device efficiency. The latest work continues that research, tuning the composition, dimensions and density of the embedded nanoparticles to maximize the thermoelectric properties of the material.

Detailed computer modeling of the new material shows it could improve the parameters that are key to an effective thermoelectric system: high electrical conductivity (so that electricity flows easily), low thermal conductivity (so as to maintain a temperature gradient), and optimization of a property known as the Seebeck coefficient, which expresses how much heat an electron carries, on average.

The new work also draws upon methods developed by optics researchers who have been attempting to create invisibility cloaks — ways of making objects invisible to certain radio waves or light waves using nanostructured materials that bend light. The MIT team applied similar methods to embed particles that could reduce the material’s thermal conductivity while keeping its electrical conductivity high.

'It’s kind of like a cloak for electrons,' Dresselhaus says. 'We got inspiration from the optical people.'

The concept that made the improvements feasible, the researchers explain, is something called anti-resonance — which causes electrons of most energy levels to be blocked by the embedded particles, while those in a narrow range of energies pass through with little resistance.

In addition, they found that the embedded nanoparticles actually enhanced the flow of electrons. 'We can increase the electrical conductivity significantly,' Zebarjadi says.

That basic effect had been observed before, she says, but only in gases, not solids. 'When we saw that, we said, that would be nice if we could have such a scattering [of electrons] in solids,' Zebarjadi says — a result she and her colleagues were ultimately able to achieve.

The technique is inspired by a concept called modulation doping, which is used in the manufacture of semiconductor devices. So far, the work has been theoretical. The next step will be to build actual test devices, the team members say. 'There are a lot of challenges on the experimental side,' Chen says.

Joseph Heremans, a professor of physics at Ohio State University, calls the work 'fabulous Harry Potter stuff, yet believable … really new, and totally surprising.' However, he notes that the effect is limited to a narrow range of electron energy, and will require fine-tuning to get the energy level just right. 'This may prove impossible to achieve in the lab, we just won’t know until someone tries,' he says.

The research was supported by the MIT Solid State Solar Thermal Energy Conversion (S3TEC), an Energy Frontier Center funded by the U.S. Department of Energy through MIT's Materials Processing Center.