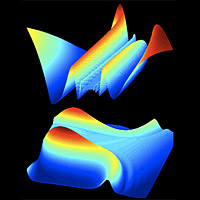 Very often in science, the unexpected discovery turns out to be the most significant. Rice University Professor Junichiro Kono and his team weren't looking for a breakthrough in the transmission of terahertz signals, but there it was: a plasmonic material that would, with adjustments to its temperature and/or magnetic field, either stop a terahertz beam cold or let it pass completely.

The finding by Kono, a professor in electrical and computer engineering and in physics and astronomy, former graduate student Xiangfeng Wang and their colleagues helps close a knowledge gap in the electromagnetic spectrum between the ranges that address electronic and photonic devices.

Their paper, 'Interference-Induced Terahertz Transparency in a Semiconductor Magneto-Plasma,' appeared online this week in the journal Nature Physics and will be published in the Dec. 24 edition. Co-authors include Texas A&M theoretical physicist Alexey Belyanin, Los Alamos National Laboratory physicist Scott Crooker and Daniel Mittleman, a Rice professor in electrical and computer engineering.

Kono's team had been studying the conductivity of indium antimonide. 'This is a classic material people started working on in the 1940s,' he said. 'It's a typical semiconductor, and if you dope it, it's highly conductive. But if you apply a magnetic field, it becomes an insulator, and that's what we planned to look at.'

When Wang used terahertz spectroscopy to study the material, its unusual properties became apparent. 'He started tuning various parameters -- the magnetic field, temperature and then the frequency -- and found that the terahertz transmission of the material changed drastically,' Kono said. 'It went from opaque to transparent.'

They found that in a magnetic field, the doped indium antimonide, a solid-state plasma, transmitted circularly polarized waves that interfered with each other. This affected terahertz beams in much the same way polarized sunglasses interfere with visible light. To their surprise, at particular combinations of settings, the beams would pass right through.

'Terahertz is an exciting field right now,' said Kono, a newly named fellow of the American Physical Society whose lab focuses on the physics and applications of semiconductor nanostructures and quantum devices. 'This frequency range is considered to be the last frontier of the electromagnetic spectrum.'

Kono said neither type of semiconductor device in common use today -- photonic and electronic -- works in the terahertz range. 'Photonic devices work in the visible and near-infrared ranges and electronic devices work in the kilohertz, megahertz and gigahertz ranges. There's a clear gap where there's no mature solid-state technology. That's why a lot of people are working to fill it.'

'I wouldn't say the terahertz region is unexplored, but it's less so,' said Mittleman, who specializes in terahertz technologies and worked on the development of a terahertz version of Rice's famous single-pixel camera. 'There are some open problems that people haven't thought about -- or have thought about, but haven't found good solutions for. The whole technology base is a lot less mature.'

Kono said applications for terahertz technology include imaging, spectroscopy and communications, and having a device that can serve as a terahertz switch would be a step forward.

Still, there are hurdles to making the lab's discovery practical, one being the operating temperature. Wang worked with the indium antimonide at temperatures between 2 and 240 kelvins (approximately -456 to -27 degrees Fahrenheit).

'The temperature is certainly a concern,' Mittleman said. 'If it's going to have impact as a useful device for controlling terahertz beams, there is some work yet to do. I don't think that's impossible, but the route is not immediately clear.

'There's not a lot of shocking new physics here,' he said, but the combination of techniques used to treat the indium antimonide made for interesting science. 'People are going to think it's pretty cool.

'I think it's nice to find things like this, because it's a great example of an unexpected discovery that could turn out to be really useful.'

The National Science Foundation and the Robert A. Welch Foundation supported the research.