Understanding the turbulence in plasmas 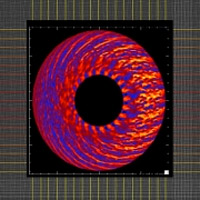 This computer simulation shows a cross-section of the plasma inside a tokamak reactor. In this simulation, only the large-scale turbulence effects are modeled — which is adequate for some cases, but not for others. The MIT researchers were able to develop a model that incorporates both scales of eddies at once, providing better predictions. Image courtesy of Nathan Howard

A longstanding joke holds that practical fusion power is about 20 years away — and always will be.

One simple phenomenon explains why practical, self-sustaining fusion reactions have proved difficult to achieve: Turbulence in the superhot, electrically charged gas, called plasma, that circulates inside a fusion reactor can cause the plasma to lose much of its heat. This prevents the plasma from reaching the temperatures needed to overcome the electrical repulsion between atomic nuclei — which, in turn, prevents those nuclei from fusing together. But in order to tame that turbulence, scientists first must understand it.

Researchers at MIT’s Plasma Science and Fusion Center (PSFC) have now taken a significant step in that direction by quantifying a previously unknown type of small-scale turbulence that can have big effects on cooling the plasma in a reactor. Their results were published online in the journal Physics of Plasmas, and further described in a recent talk at a conference called the U.S.-E.U. Joint Transport Task Force Workshop.

Previously, a mathematical model known as gyrokinetics has been used to predict the effects of turbulence in a standard fusion reactor called a tokamak — but the MIT researchers found that while the model works in some cases, it breaks down in others. “Whenever a certain type of turbulence is present, the model works,” says Nathan Howard, a PSFC postdoc who is the lead author of the new report. “But when this other kind is present, it doesn’t work.”

Understanding this discrepancy, known as a transport shortfall, could be crucial in predicting the performance of larger experimental fusion reactors that are now under development, the researchers say. These new reactors, in turn, are seen as a key step toward the eventual development of commercial power-producing reactors.

Fusion, the reaction that powers the sun, has long been seen as a nearly ideal energy source: Its fuel supply, hydrogen, is effectively limitless, and fusion would produce little radioactive waste. But the challenges of making fusion work have been unexpectedly daunting.

Tokamak reactors consist of a large donut-shaped space surrounded by heat-resistant shielding material and powerful magnetic coils. Magnetic fields prevent the plasma inside, consisting of hydrogen atoms that are heated to hundreds of millions of degrees Celsius, from contacting the walls of the chamber, which would vaporize from the heat.

Two processes predominate in the loss of heat from these multimillion-degree plasmas: loss through electrons and loss through ions. “The prevailing model has been that both can be accounted for by just modeling the large eddies,” Howard says.

But experiments conducted by researchers including Anne White, the Norman C. Rasmussen Assistant Professor of Nuclear Science and Engineering (NSE) at MIT, found discrepancies: About twice as much heat was being lost as the model predicted in experiments at a San Diego tokamak reactor called DIII-D, but not at the very similar Alcator C-Mod reactor at MIT.

White, who is a co-author of the new paper, says that by showing that the discrepancy did not occur in the MIT reactor, “We showed that the DIII-D shortfall was not a general thing. Now, we finally have a second tokamak to explore, and we found it’s not there.”

It turned out, the researchers found, that the discrepancy happened when the heat loss was mainly through electrons, but not when it was through ions.

“We demonstrated for the first time that this phenomenon was not universal,” says Howard, who was able, with his colleagues, to attribute the discrepancy to fine-scale turbulence. “We have been able to simulate all the different types of turbulence in order to explain the experimental results.”

“We were not modeling the tiny eddies,” White adds. “There are two types of turbulence, and we need to model both.” The new finding shows the inadequacy of “a standard model that we’ve been using for a long time,” she says, “so this result is kind of striking.”

Terry Rhodes, a researcher in the physics and astronomy department at the University of California at Los Angeles who was not involved in this research, calls these findings “an important step forward in the effort to test and validate … simulations of fusion plasma turbulence and transport.” While previous work had shown a discrepancy between theory and actual experimental results, the MIT team’s work “provides a counterexample to this discrepancy that the community has been searching for. Scientists in this area will be actively studying their results for clues as to the nature of the discrepancy.”

The work also included research scientist Martin Greenwald, the associate director of PSFC; Matthew Reinke, a postdoc at the PSFC; NSE graduate student John Walk; Christopher Holland of the University of California at San Diego; Jeff Candy from General Atomics; and Tobias Görler of the Max Planck Institute for Plasma Physics in Garching, Germany. The work was supported by the U.S. Department of Energy and made use of the National Energy Research Scientific Computing Center.