Universe May Face a darker future 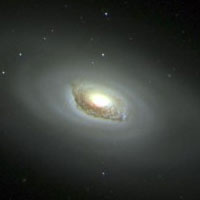 New research offers a novel insight into the nature of dark matter and dark energy and what the future of our Universe might be.

Researchers in Portsmouth and Rome have found hints that dark matter, the cosmic scaffolding on which our Universe is built, is being slowly erased, swallowed up by dark energy.

The findings appear in the journal Physical Review Letters, published by the American Physical Society. In the journal cosmologists at the Universities of Portsmouth and Rome, argue that the latest astronomical data favours a dark energy that grows as it interacts with dark matter, and this appears to be slowing the growth of structure in the cosmos.

Professor David Wands, Director of Portsmouth’s Institute of Cosmology and Gravitation, is one of the research team.

He said: “This study is about the fundamental properties of space-time. On a cosmic scale, this is about our Universe and its fate.

“If the dark energy is growing and dark matter is evaporating we will end up with a big, empty, boring Universe with almost nothing in it.

“Dark matter provides a framework for structures to grow in the Universe. The galaxies we see are built on that scaffolding and what we are seeing here, in these findings, suggests that dark matter is evaporating, slowing that growth of structure.”

Cosmology underwent a paradigm shift in 1998 when researchers announced that the rate at which the Universe was expanding was accelerating. The idea of a constant dark energy throughout space-time (the “cosmological constant”) became the standard model of cosmology, but now the Portsmouth and Rome researchers believe they have found a better description, including energy transfer between dark energy and dark matter.

Research students Valentina Salvatelli and Najla Said from the University of Rome worked in Portsmouth with Dr Marco Bruni and Professor Wands, and with Professor Alessandro Melchiorri in Rome. They examined data from a number of astronomical surveys, including the Sloan Digital Sky Survey, and used the growth of structure revealed by these surveys to test different models of dark energy.

Professor Wands said: “Valentina and Najla spent several months here over the summer looking at the consequences of the latest observations. Much more data is available now than was available in 1998 and it appears that the standard model is no longer sufficient to describe all of the data. We think we’ve found a better model of dark energy.

“Since the late 1990s astronomers have been convinced that something is causing the expansion of our Universe to accelerate. The simplest explanation was that empty space – the vacuum – had an energy density that was a cosmological constant. However there is growing evidence that this simple model cannot explain the full range of astronomical data researchers now have access to; in particular the growth of cosmic structure, galaxies and clusters of galaxies, seems to be slower than expected.”

Professor Dragan Huterer,of the University of Michigan, has read the research and said scientists need to take notice of the findings.

He said: “The paper does look very interesting. Any time there is a new development in the dark energy sector we need to take notice since so little is understood about it. I would not say, however, that I am surprised at the results, that they come out different than in the simplest model with no interactions. We’ve known for some months now that there is some problem in all data fitting perfectly to the standard simplest model.”