Voyager 2 at 12,000 Days: The Super-Marathon Continues 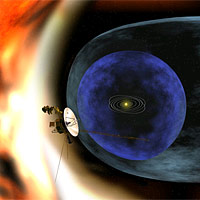 This artist's rendering depicts NASAs Voyager 2 spacecraft as it studies the outer limits of the heliosphere - a magnetic 'bubble' around the solar system that is created by the solar wind. Image credit: NASA/JPL-Caltech.

NASA's plucky Voyager 2 spacecraft has hit a long-haul operations milestone today (June 28) -- operating continuously for 12,000 days. For nearly 33 years, the venerable spacecraft has been returning data about the giant outer planets, and the characteristics and interaction of solar wind between and beyond the planets. Among its many findings, Voyager 2 discovered Neptune's Great Dark Spot and its 450-meter-per-second (1,000-mph) winds.

The two Voyager spacecraft have been the longest continuously operating spacecraft in deep space. Voyager 2 launched on August 20, 1977, when Jimmy Carter was president. Voyager 1 launched about two weeks later on Sept. 5. The two spacecraft are the most distant human-made objects, out at the edge of the heliosphere -- the bubble the sun creates around the solar system. Mission managers expect Voyager 1 to leave our solar system and enter interstellar space in the next five years or so, with Voyager 2 on track to enter interstellar space shortly after that.

The Voyagers were built by JPL, which continues to operate both spacecraft. Caltech manages JPL for NASA.