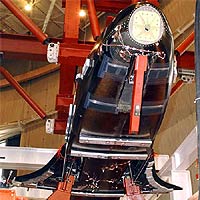 NASA's X-37 Approach and Landing Test Vehicle is installed in a structural test facility at Boeing's Huntington Beach, Calif., plant. The tests, which were completed in July 2003, were conducted to verify the structural integrity of the vehicle in preparation for atmospheric flight tests. The X-37 is a flight demonstrator project to flight test advancing technologies for NASA's Orbital Space Plane Program. (Rod Davis/Boeing)

The series of ground-based, proof tests are intended to verify the structural integrity of the X-37 Approach and Landing Test Vehicle. The tests apply pressure to the vehicle, simulating flight stresses and loads the X-37 may encounter in flight.

"An initial review of the test data indicates that the vehicle performed as expected, and we are very pleased," said Dan Dumbacher, X-37 project manager at NASA's Marshall Space Flight Center in Huntsville, Ala. "Following a detailed analysis of the results the X-37 Atmospheric Vehicle will be returned to its assembly facility in Palmdale, Calif., for preparation for atmospheric flight testing."

"We are proud of the government and Boeing X-37 team for meeting the challenge and aggressively moving toward flight testing of the Approach and Landing Test Vehicle," said Dumbacher.

The Approach and Landing Test Vehicle is one of two vehicles that comprise the X-37 Advanced Technology Flight Demonstrator Project. An orbital version of the vehicle is being developed to test and validate technologies in the environment of space and will test vehicle system performance during orbital flight, reentry and landing. Technologies to be demonstrated include thermal protection systems; autonomous advanced guidance, navigation and control systems; high temperature structures; conformal reusable insulation; and high temperature seals. Both vehicles are developed by Boeing Expendable Launch Systems of Huntington Beach, Calif.

Flight demonstrators like the X-37 have a critical role in validating technologies that cannot be demonstrated on the ground. NASA is pursuing these and other space launch technologies that will enable the Agency to achieve its goal of establishing safe, reliable and affordable access to space.