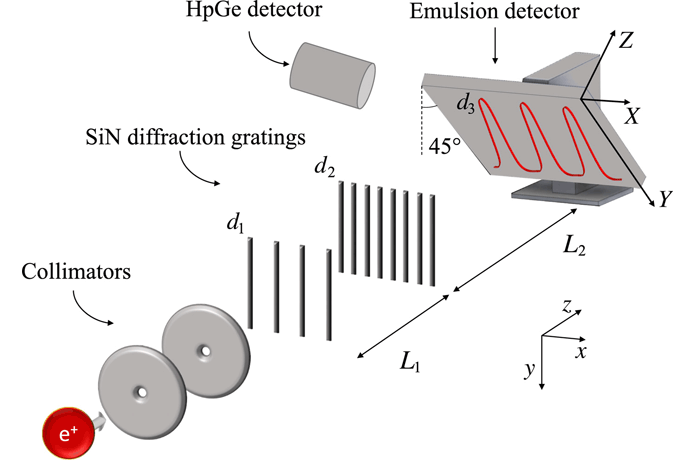 For the first time, scientists have performed an iconic physics experiment with a positron - the antimatter counterpart of an electron, one of the fundamental particles.

Not only did they get some truly interesting results, but this achievement could become the first step towards potentially revolutionary discoveries.

The experiment - an antimatter version of the famous double-slit setup - was carried out by researchers from Switzerland and Italy in order to lay the groundwork for a novel line of super-sensitive experiments that might help solve a mystery concerning the Universe's two domains of matter.

Our day-to-day lives are dominated by one form, which we simply call matter. But each member of the grand library of fundamental particles has an antimatter twin that shares most of its characteristics, apart from a reversed charge and a few other quantum flips.

Bring the two types of matter together and they vanish in a puff of energy, which raises some interesting questions. If we're surrounded by one kind of matter, does that mean more of it exists than antimatter? And if so, what makes each so special?

So far, our best attempts to find answers have failed to throw up even the smallest clue. The two domains of matter are still, for all meaningful purposes, identical.

According to the Standard Model of particle physics, antimatter should also obey the laws of gravity in exactly the same way as normal matter. A handful of experimental attempts to compare the two types of matter back up the theory.

That doesn't stop physicists from finding new ways to look for loopholes and caveats. Not when the existence of the Universe is at stake! Even a subtle difference in how gravity affects antimatter could be the big break we need. But gravity is an incredibly weak force to investigate.

Which brings us to one of the most classic experiments in all of physics, the one physicists have now achieved with an antimatter particle. It involves two slits, one particle, and a whole world of mental pain.

We've been testing how light shines through thin windows cut into screens for centuries.  Two hundred years ago, a physicist named Thomas Young added a second window parallel to the first and demonstrated that the wavy pattern the light cast on wall behind the slits was a sign that light was made up of waves that interfered with one another.

Fast-forward a century and a half, when another big name in physics, Richard Feynman, considered Young's double-slit experiment in light of what had since been discovered about matter.

Particles like electrons exist as waves of possibility until they are measured and bestowed with properties, including an exact position. So if nobody measures an electron, could it wash through both slots like a wave, split apart, and reform to interfere with itself, just like light?

As absurd as it sounds, this is exactly what happens.

While various experiments using streams of electrons were carried out in the decades following Feynman's thought experiment, it wasn't until 1989 that Japanese researchers at Hitachi managed to fire lonely electrons at a screen one by one.

Since then, the same quantum weirdness has been shown for all kinds of chunky particles, including whole molecules. They all show that discrete bits of matter, no matter how big, have wave-like behaviours.

Antimatter is a whole other story. It's not the easiest material in the Universe to get on tap, so while in theory it should also act like a wave, it's never been observed to do this.

To conduct the experiment, the researchers used a facility in Italy called the Laboratory for Nanostructure Epitaxy and Spintronics on Silicon, or L-NESS.

Positrons – electrons with a positive charge instead of a negative one – were filtered out from a decaying radioactive material and streamed through a two-step set-up called a Talbot-Lau interferometer.

This is a slightly more complex form of a double-slit grating plus screen, but amounts to the same thing in the end.

After 200 hours' worth of positron-shine, the physicists analysed the wavy pattern to show individual positrons act as waves when nobody is looking, just like normal matter.

Right now it's a proof of concept rather than definitive evidence that can be used to compare matter and antimatter. But it's an exciting step towards a new chapter in antimatter research. If positrons experience even the tiniest difference in gravity's gentle pull, we're going to need some pretty sensitive tools to find it.

A test like this won't be guaranteed to spot such anomalies, but it could lead to the kinds of ultra-sensitive experiments that we need to crack this hard nut. Interference patterns are what we use to detect the tiniest wobble caused by gravitational waves, for example.

The next step is to collect more data that just might help explain why there is something instead of nothing. Hopefully that's not too far away - we're dying to find out why we're here.

The study has been published in Science.